Erdogan said Turkey had stopped a Syrian-flagged ship in Marmara, according to state-run Anatolia News Agency. 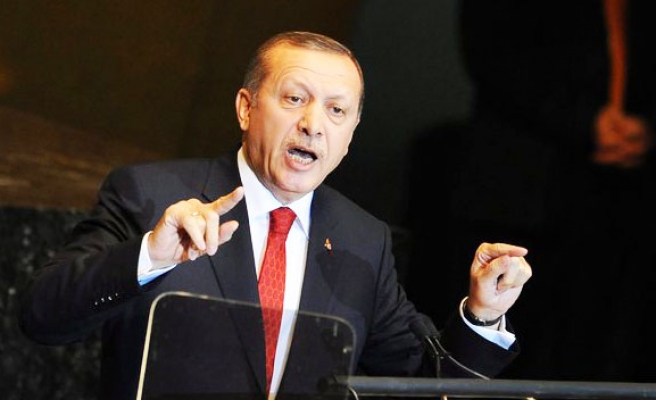 Turkey has seized a Syrian-flagged ship and will intercept any arms shipments headed to Syria, Prime Minister Tayyip Erdogan said late on Friday, a response to Damascus' bloody crackdown on anti-government protesters.

Speaking to reporters in New York late on Friday where he attended the U.N. General Assembly, Erdogan said Turkey had stopped a Syrian-flagged ship in Marmara, according to state-run Anatolia News Agency. It did not indicate whether the ship was stopped in the Sea of Marmara or the port of Marmara.

Erdogan did not say when the ship was seized or whether any weapons were found aboard.

"We have already made a decision to stop and prevent any vehicle carrying any type of weapon to Syria. We told them our decision as well as shared it with neighboring countries," Anatolia quoted Erdogan as saying.

"As you recall, we had previously made an interception to a ship in Marmara. If there are planes carrying weapons, or such shipments by land, then we would stop and confiscate them as in the past."

Turkish authorities in August intercepted an arms shipment from Iran to Syria. In March, Turkey told a U.N. Security Council panel it seized a cache of weapons Iran was attempting to export in breach of a U.N. arms embargo.

After long maintaining close relations with its neighbour, Turkey has adopted a tougher stance towards Syrian President Bashar al-Assad, urging him to end a military crackdown on a popular uprising and to launch democratic reforms.

Erdogan said on Wednesday Turkey had suspended talks with Syria and that it may impose sanctions on Damascus.

Bilateral trade between Turkey and Syria was $2.5 billion in 2010, up from $500 million in 2004. Investments of Turkish firms in Syria reached $260 million, Turkish data show.

Assad's attempt to stamp out dissent by assaulting restive areas with troops and tanks has prompted the United States and the European Union to gradually escalate economic sanctions against the authoritarian Damascus leadership.

Turkey, which has been Syria's main trading partner, has not indicated what type of sanctions it might impose on Syria, but Turkish officials have said they would target the administration and not the Syrian people.