Erdogan accused Damascus of launching dark propaganda against Turkey, saying "I will visit the camp in Hatay. I want to see the living conditions in the camps." 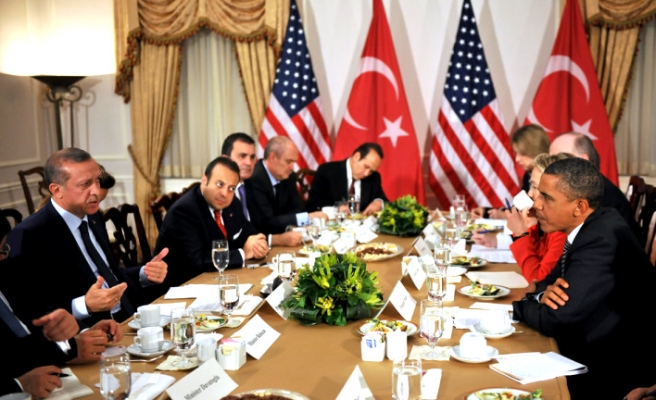 Turkey has suspended talks with Syria and may impose sanctions on Damascus, Prime Minister Tayyip Erdogan said, the clearest sign yet that Ankara has parted ways with President Bashar al-Assad over his bloody crackdown on anti-government protesters.

After long maintaining close relations with neighbour Syria, Turkey has spoken out increasingly against Assad, urging him to end a military crackdown on a popular uprising and to launch democratic reforms.

During a tour of Arab countries last week, Erdogan said that Turkey's approach to Syria had changed and that Ankara would soon announce its "final" decision on Syria by the time the U.N. General Assembly meeting in New York.

"I halted talks with the Syrian government. I did not want to come to this point. But the Syrian government forced us to make such a decision," Erdogan told Turkish journalists in New York on Wednesday after meeting U.S. President Barack Obama on the sidelines of the U.N. General Assembly.

"The United States has sanctions regarding Syria. Our foreign ministers will be working together to decide what our sanctions may be," Erdogan said.

"As a result of this cooperation, the sanctions may not resemble those on Libya. Every sanction differs according to country, people and demographic structure. Thus, sanctions on Syria will be different. We have preliminary studies on the issue," he said, according to the state agency Anatolian.

Turkey has expressed its regret over some news reports in the Syrian state-run news agency SANA and some dailies about the camps in Turkey.

In a statement late on Tuesday, Turkey's Ministry of Foreign Affairs said about news reports claiming that the camps in Turkey turned into centers of isolation, rape and torture, "these are nothing but dark propaganda, lie and evil."

"Syrian government has launched a dark propaganda against Turkey. It is really obnoxious. We do not have any confidence in the current government. I will visit the camp in the southern Turkish province of Hatay. I want to see the living conditions in the camps," Erdogan said.

Ministry of Foreign Affairs added, "Syrian people in those camps have taken shelter in Turkey because of their bad experiences and their fears in their own country. It is the responsibility of Syrian government to eliminate reasons which led people to leave their own country. Turkey has mobilized all its capabilities to ensure Syrian people's security in the camps. Authorities in the camps in the southern Turkish province of Hatay fulfil their responsibilities with a great devotion. United Nations and Syrian Red Crescent officials have already admitted it".

"Under the principle of rule of law, Turkish authorities will investigate allegations by the Syrian state-run news agency. Turkey has launched an official initiative at the Syrian Ministry of Foreign Affairs. We asked information about people mentioned in the news reports. We hope that Syrian authorities will display the same sensitivity about allegations regarding recent developments in Syria," the Ministry added.

Turkey, which has been Syria's main trading partner, had resisted sanctions up to now after suffering the consequences of past generations of sanctions imposed on next-door Iraq during Saddam Hussein's rule and now on Iran, another neighbour.

Bilateral trade between Turkey and Syria was $2.5 billion in 2010, up from $500 million in 2004. Investments of Turkish firms in Syria reached $260 million, Turkish official data show.

Turkey is one of the few countries in the world that has had open communication lines with Damascus.

The United States and EU, along with the governments of Britain, France and Germany, have called for Assad to quit.

Erdogan, who once vacationed together with Assad and his family on the Turkish Mediterranean coast, has stopped short of calling for his departure.

But he told journalists in New York, "We do not have any confidence in the current government".