A Turkish newspaper has published a list of names of Israeli attackers that participated in the 2010 Mavi Marmara raid that left nine Turkish activists dead, found by searching into Facebook. 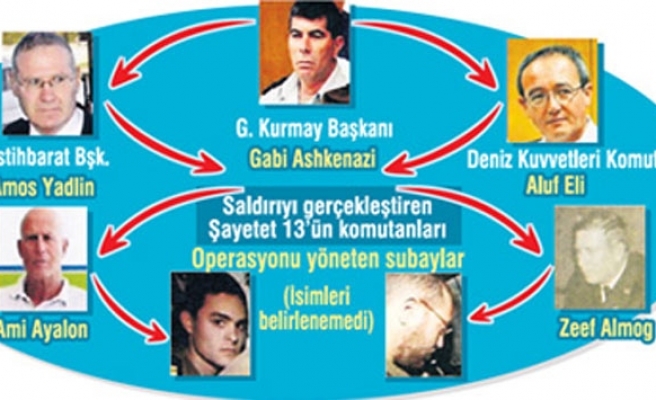 A Turkish newspaper has published a list of names of Israeli attackers that participated in the 2010 Mavi Marmara raid that left nine Turkish activists dead, found by searching into Facebook.

Turkish daily Sabah, wrote, that the names were acquired by analyzing social connections on Facebook and Twitter, as well as comparing photographs on those websites with ones taken on board the Marmara.

The list of 174 names was transferred to Turkish prosecutors, in addition to pictures of 10 Israeli soldiers the paper said Turkish intelligence agencies could not identify.

Sabah said that upon the request of the prosecutor conducting the investigation, Mehmet Akif Ekinci, intelligence units first examined images of the raid and then launched "a commando hunt" on social networking websites such as Facebook and Twitter. They also examined pictures of a visit by Israeli Prime Minister Benjamin Netanyahu to the top-security Flotilla 13 base on the Israeli coast near Haifa, which conducted the flotilla raid, in October of last year, to identify the soldiers present. After identifying a few soldiers, Hebrew-speaking experts examined their online correspondence with other Israeli soldiers who are thought to have taken part in the Mavi Marmara raid, and were able to identify more of those involved via their "friends" lists on Facebook. The names of the soldiers were also reportedly confirmed by the Turkish intelligence units' sources in Israel.

The move came as the Istanbul Chief Prosecutor's Office appealed to the Turkish Intelligence Organization (MİT) in order to obtain information on the identities of the soldiers who were involved in the raid which left nine Turks dead in May of last year, Turkish newspaper Zaman reported in early September.

According the paper, an affirmative answer from MİT would allow the prosecutor to open court cases against Israeli officials including Prime Minister Binyamin Netanyahu, President Shimon Peres, former army chief of General Staff Lt.- Gen. Gabi Ashkenazi, and the soldiers involved in the raid.

The charges would include the "willful murder and torture" and "limiting freedom" of the passengers, the paper reported.

Earlier this month, a lawyer for the Turkish based Humanitarian Relief Foundation (IHH) said he had submitted a list of the soldiers involved in the Mavi Marmara raid to Turkish prosecutors.

"We have presented a list of Israeli soldiers who gave the order for and who were involved in the attack on the Turkish flotilla to the Istanbul prosecutor's office," Ramazan Ariturk, lawyer for the group that organized the Gaza flotilla said.

"Currently we are waiting for the prosecutor's office to issue an order for arrest," he added.