Turkey "parachuted" humanitarian aid for the first time in a foreign country since Cyprus Peace Operation. 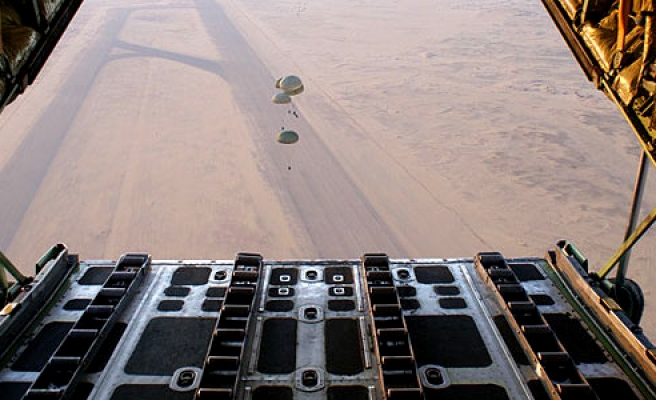 Turkey parachuted humanitarian aid in the south of Sirte and near Niger border of Libya on Sunday.

Turkey "parachuted" humanitarian aid for the first time in a foreign country since Cyprus Peace Operation.

Officials of Turkish Consulate General in Benghazi, who were informed by executives of Libya's National Transitional Council (NTC), said that the food aid reached NTC officials in the region.

NTC officials also conveyed that the assistance was distributed to people in need, and they thanked for the support of Turkey.

Turkish officials said that they would continue to parachute the food assistances which were prepared by Turkish Red Crescent aid society.

Meanwhile, officials continue to investigate the assailants who attacked a Turkish C-160 aircraft while parachuting the assistance in the south of Sirte.

On Sunday, an anti-aircraft attack was staged on a Turkish cargo plane that was parachuting humanitarian aid in Libya. Pilots checked the coordinates of the attack and reported it to relevant authorities. After the cargo plane landed at Benghazi Military Airport, experts checked whether there was any bullet hole on the plane but the plane was not hit during the attack.

Military executives said anti-aircraft directly targeted the wings, but the plane changed its route as pilots saw where the attack was coming and thus they prevented a possible disaster.