There are Turkish and Egyptian flags on Prime Minister Recep Tayyip Erdogan's photographs, stuck on billboards in Cairo's streets. 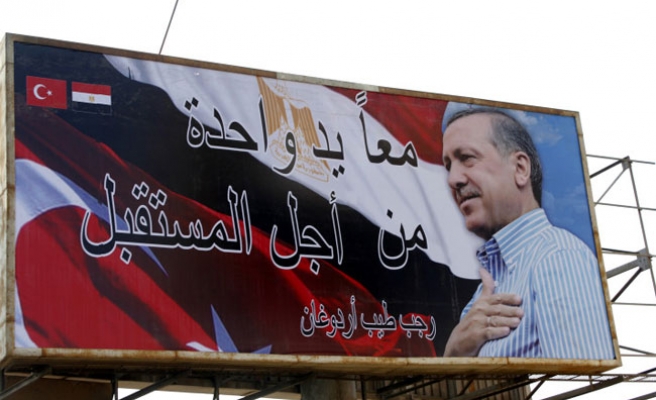 Photographs of the Turkish prime minister have been stuck on billboards in the Egyptian capital of Cairo ahead of his visit to this country.

There are Turkish and Egyptian flags on Prime Minister Recep Tayyip Erdogan's photographs, stuck on billboards in Cairo's streets.

"Hand-in-hand with Recep Tayyip Erdogan for a common future," writes on the billboards.

The head of World Turkish Business Council, Tunc Ozkan told AA correspondent that Erdogan's visit to Egypt was of historic importance, and this visit would contribute to economy, military and political relations of the two countries.

Moreover, the Egyptian media headlined Erdogan's visit to Cairo and wrote that members of Muslim Brotherhood would meet Erdogan.

Egypt's Prime Minister Essam Sharaf will welcome Erdogan as he arrives at Cairo's airport, which is defined by Egyptian Foreign Ministry executives as an indicator Egypt pays to this visit.

Egyptian people are planning to welcome Erdogan at the airport with Turkish flags. Activists speaking to AA reporter said they were excited about Erdogan's visit.

In the meantime, Egyptian people gathered in front of Turkish Embassy in Cairo ahead of Erdogan's visit and chanted slogans in the Turkish premier's favor. They also asked Egypt to implement an action plan against Israel, similar to that implemented by Turkey, and said Turkey and Egypt should take joint action in the region.

The same group is expected to be present at the airport by evening to welcome Erdogan.

Later on Monday, Turkish Prime Minister Recep Tayyip Erdogan is set to leave for Cairo, the first stop of his four-day tour of Egypt, Tunisia and Libya from September 12 to 15.

The visit aims at extending Turkey's support to the friendly countries which have recently undertaken transition process.

Erdogan and his Egyptian counterpart are set to sign a Joint Political Statement about establishment of a High-Level Strategic Cooperation Council. They also sign a series of cooperation deals in economy, trade, education; culture, sports, press and public administration.

The premier will hold talks with Arab League Secretary-General Nabil al-Araby after delivering a speech at the Arab League Foreign Ministers' Council Meeting.