﻿Turkey 'ready' to be gas link for Turkmenistan and Europe

Turkish president Abdullah Gul met with his Turkmen and Kyrgyz counterparts at the Cankaya presidential palace in Ankara. 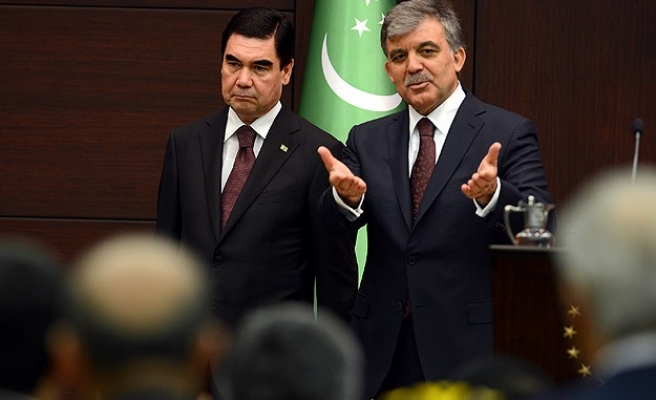 Turkey is willing and ready to transfer natural gas between Turkmenistan and Europe, Turkish President Abdullah Gul said on Tuesday, emphasizing the strengthening of energy cooperation between Turkey and Turkmenistan.

In a joint press conference with his Turkmen counterpart Gurbanguli Berdimuhammedov, Gul discussed the flourishing relations between Turkey and Turkmenistan in both the economic, construction and cultural sectors.

Gul drew attention to Turkish construction sector's activities in Turkmenistan, and confirmed that Turkey's projects in Turkmenistan exceeded $40 billion up to May 2014.

"This is thanks to my dear brother (Berdimuhammedov)'s confidence in Turkish companies," Gul said.

The guest president also said that the intensive diplomatic relations between Turkey and Turkmenistan will increase the bilateral cooperation at all levels.

Berdimuhammedov is scheduled to attend an International Organization of Turkic Culture (TURKSOY) conference in Bodrum, one of Turkey's renowned tourist resorts in the southwest of the country.

TURKSOY is an international cultural organization in countries with Turkic populations who speak Turkic languages.

As of 2013, TURKSOY has six sovereign member states and eight non-sovereign observer states.