Turkish Prime Minister Recep Tayyip Erdogan left for Russia on Wednesday that recent regional and international matters, especially Syria, will be high on the agenda. 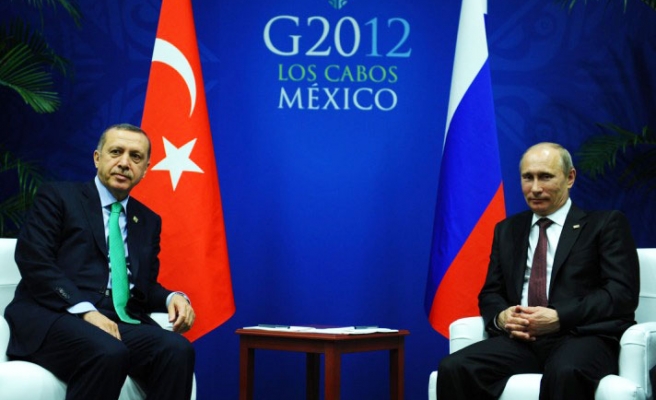 A gleaming skyscraper rises from the ultra-modern financial centre in the heart of Moscow, dwarfing cathedral cuppolas and bombastic Stalinist highrises, a symbol of how far Turkish business has come in the former Cold War rival.

The distinctive Turkish-built steel and glass towers of Naberezhnaya, the second tallest skyscraper in Russia, will serve as a powerful backdrop when President Vladimir Putin hosts visiting Turkish Prime Minister Tayyip Erdogan in the Kremlin on Wednesday to talk business, energy and regional power politics.

"Turkey today is much more assertive and independent than it was 20 years ago. It wants to be not only a part of NATO and American-led alliances, but also an independent player in the whole area," said Fyodor Lukyanov, editor of the journal Russia in Global Affairs.

But Turkey's regional aspirations in areas where Moscow is sensitive to its waning influence have complicated an already intricate relationship in which cooperation in trade and energy politics is set off by conflicting regional foreign policies.

"Turkey and Russia resemble each other; they have the same claims. Psychologically, Putin and Erdogan understand each other quite well, but at the same time all their interests do not coincide. For example, we see that in the Middle East."

Almost a year after the death of Russian ally Muammar Gadaffi in Libya, Moscow and Ankara are at diplomatic loggerheads over the fate of Syrian President Bashar al-Assad.

Once photographed with Assad and his family at a vacation resort before anti-government uprisings demanding his departure, Erdogan has since turned his back on the former ally, calling for his removal and hosting Syrian rebel fighters on its soil.

Turkey's ire was raised last month when Syria, recipient of Russian air defence systems, downed a fighter jet that it claimed was in its airspace. The incident forced Ankara to call on the other member states of NATO for consultations over what it called an "act of aggression".

Putin however, fearing a replay of the Libyan scenario, has continued sending Assad arms and has protected him from harsher sanctions at the U.N. Security Council.

Moscow would be loath to see its last stronghold in the Middle East fall - especially one that hosts a small naval maintenance and repair facility, Russia's only naval base outside of the former Soviet Union.

Indicating that Erdogan may work to try to influence Putin's position over Syria, Deputy Prime Minister Bulent Arinc told reporters that new unilateral sanctions against Syria may be passed after Erdogan returns from Moscow.

"I can say assuredly that new horizons will open up on this subject (Syria) after our prime minister's visit to Russia and that new sanctions against Syria will come onto the agenda," Arinc told reporters after a cabinet meeting on Monday.

Russia, for its part, has made clear it has no plans to back sanctions against Assad. It has stressed it will not agree to negotiations that make his departure a precondition.

Russia and Turkey are also aware of their differences in the South Caucasus region where their respective loyalties to Armenia and Azerbaijan divide them in the frozen conflict of Nagorno-Karabakh.

War between ethnic Azeris and Armenians erupted in 1991 over the Azeri land Nagorno-Karabakh region, occupied by Armenia as the Soviet Union collapsed two decades ago.

Turkey closed its border with Armenia in a gesture of solidarity with ethnic kin in Azerbaijan during the Nagorno-Karabakh conflict. Russia, on the other hand, maintains an army base in Armenia.

"In the Caucasus there is always a potential rivalry (between Russia and Turkey)," said Lukyanov.

Turkish construction firm Enka restored Moscow's White House in 1994 after then President Boris Yeltsin ordered tanks to fire at parliamentarians holed up in the building during a rebellion against his leadership.

Analysts say the construction projects Turkish firms receive are part of a complex tit-for-tat exchange between the two countries that has seen Turkey raise the amount of gas it buys from Russia to nearly half its total imports.

In 2008 Russia overtook Germany as Turkey's biggest trading partner, the lion's share of which has come from natural gas contracts.

Turkey hopes to use its geographic location between oil rich states on the Caspian and energy hungry Europe to boost its clout as an energy transit hub and has looked primarily to Russia and Azerbaijan to fill that role.

Ankara's dependency on Moscow has led some analysts to speculate that while the two countries have their differences, Erdogan may be going to make sure Putin understands the two countries are still by and large partners.

"It won't be suprising for Erdogan to knock on the Kremlin walls trying to persuade Putin (over Syria) and get no response," wrote columnist Sami Kohen in Milliyet newspaper.

"However, from the point of view of minimising the effect of the shadow Syria has cast across their relationship, it will be important and helpful to continue a sincere dialogue."

Turkey has approved Russia's plans to allow the almost $20 billion South Stream pipeline, which aims to supply southern Europe with 63 billion cubic metres of natural gas a year, to pass under its territorial waters.

Even with Turkey's permission to build the pipeline through its waters, Ankara may still use the line as a chip in negotiations over gaining enough gas for its own domestic supply.