Turkey says can send warships to east Med at any time

Erdogan said Israel could not do whatever it wanted in the eastern Mediterranean and that Turkish warships could be there at any moment. 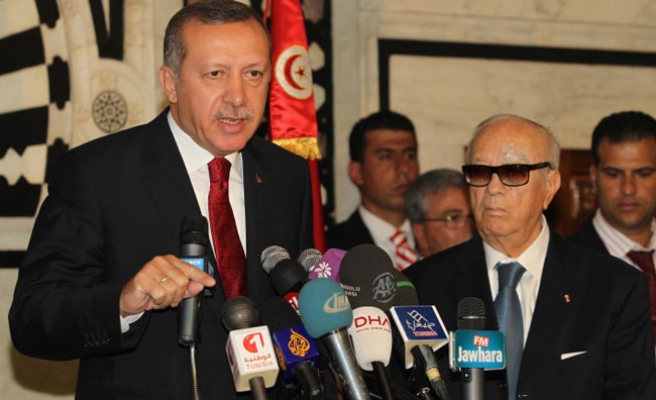 Turkish Prime Minister Tayyip Erdogan said on Thursday Israel could not do whatever it wanted in the eastern Mediterranean and that Turkish warships could be there at any moment.

Erdogan's comments, made during a visit to Tunis as part of a tour of Arab countries, were the latest in a war of words between the two regional powers, whose relations have deteriorated since Israel killed nine Turks aboard an aid ship headed for Gaza last year.

"Israel cannot do whatever it wants in the eastern Mediterranean. They will see what our decisions will be on this subject. Our navy attack ships can be there at any moment," Erdogan told a news conference shortly after arriving in Tunis.

Turkey downgraded diplomatic ties with Israel and halted defence-related trade after Israel repeated its refusal last week to apologise for the raid on the Mavi Marmara ship which had attempted to break Israel's blockade on Gaza.

Ankara said it was prepared to escort any future Gaza-bound ship with naval ships.

But in an interview last week with Al Jazeera television, excerpts of which were released by Turkish state media, Erdogan said he saw the Israeli storming of the ship in May, 2010 as "grounds for war" but that Turkey had acted "with patience".

Erdogan, seeking to expand Turkey's regional influence, is on a tour of Egypt, Tunisia and Libya, where he has so far received an enthusiastic welcome. His criticism of Israeli has helped win him great popularity in Arab countries.