We will continue legal fight in the international arena in order to end the illegal occupation in Gaza and the West Bank, Davutoglu said. 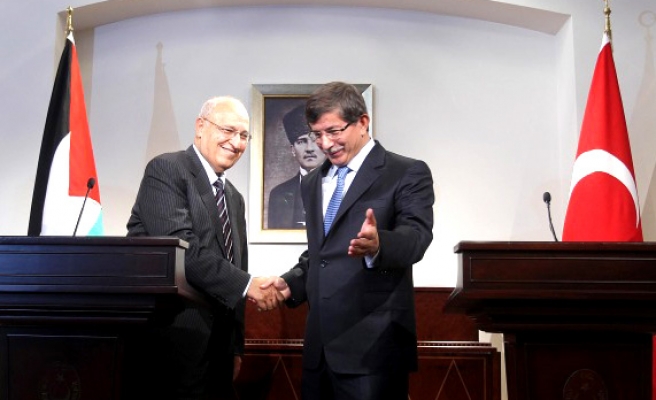 Turkish Foreign Minister Ahmet Davutoglu said Monday that the occupation in Gaza and the West Bank was illegal and that such an occupation was strengthened by an illegal blockade of Gaza.

Speaking at a press conference with Palestinian official Nabil Shaath in Turkish capital of Ankara on Monday, Davutoglu said that such an illegal occupation and blockade could not be legally accepted.

We will continue legal fight in the international arena in order to end the illegal occupation in Gaza and the West Bank, Davutoglu said.

During our meeting with Shaath today, we focused on two issues: the recognition of Palestine in the United Nations (UN) and the recent stage Turkish-Israeli relations are
in, Davutoglu said.

We shared with Shaath our thoughts on obtaining a decision from the UN General Assembly on Israel before going to the International Court of Justice, Davutoglu said.

We are about to complete our preparations in order to begin the process at the UN General Assembly, Davutoglu also said.

Shaath told the joint news conference that he came to Turkey to hold talks about their "September Campaign" which aimed at recognition of Palestine by the United Nations.

Israel did not only occupy Palestine, it also built settlement units in those occupied areas, he said.

"Palestinian Liberation Organization declared the state of Palestine in Algeria in 1988. Turkey played a pioneering role and became the first country recognizing the state of Palestine. While working for international recognition of our state, we have also maintained the peace talks. However, our territories are still under occupation," he said.

Shaath said that Israel was still building settlement units in eastern Jerusalem, adding that some 6 thousand Palestinians had been imprisoned in Israel.

Referring to Israeli forces' raid on the aid flotilla, Shaath said that they well-understood Turkey's attitude against Israel.

Turkey wants nothing but its legitimate rights, he said, and extended their support to Turkey's decision to apply to international courts.

Any Israeli hegemony in the east of Mediterranean is unacceptable, he said, adding that they wanted a peace based on the principle of equality, freedom and independence for citizens of all countries in the Mediterranean region.