The Turkish foreign minister said that Turkey and Brazil had common position and principles on Iran's nuclear program. 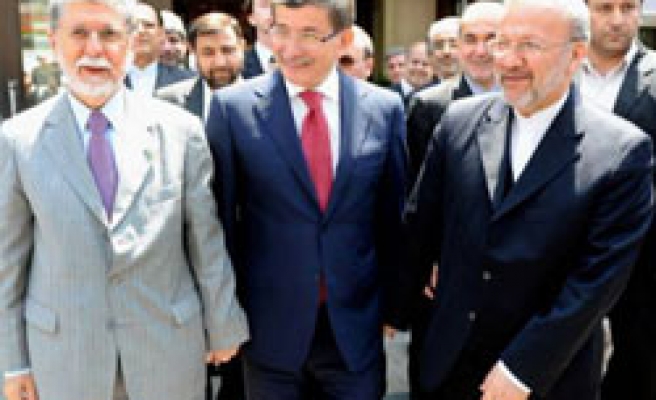 Turkish Foreign Minister Ahmet Davutoglu said on Sunday Iran had expressed willingness to have talks with the European Union about its nuclear programme after the end of the month of Ramadan in early September.

Speaking before a lunch meeting with Iranian Foreign Minister Manouchehr Mottaki and their Brazilian counterpart Celso Amorim, Davutoglu said Ankara was trying to revive the international negotiations as soon as possible.

"Mr Mottaki confirmed that he was in favour of the meeting after Ramadan. Obviously that depends on the flow of developments, but nobody is against holding the meeting in principle," Davutoglu said.

He was referring to comments made by Mottaki before his latest visit to Turkey. The Muslim fasting month of Ramadan ends in the first half of September.

The Turkish foreign minister said that Turkey and Brazil had common position and principles on Iran's nuclear program.

"However, we believe that every country has to develop nuclear technology within peaceful means and in cooperation with the International Atomic Energy Agency (IAEA)," Davutoglu told a joint press conference with his Brazilian counterpart Celso Amorim.

Davutoglu and Amorim met at a breakfast at Istanbul's Four Seasons Bosphorus Hotel earlier on Sunday to discuss bilateral relations and developments in the Middle East.

"Turkey and Brazil have done everything in their power in the recent year to solve the issue through diplomatic means, and we will continue to do so," Davutoglu said.

Davutoglu said the two countries aimed to contribute to negotiations between Iran and P5+1 (the permanent five members of the UN Security Council plus Germany).

The Turkish minister said he would have a trilateral meeting with both his Brazilian counterpart Amorim and Iranian counterpart Manuchehr Motaki over luncheon later on Sunday to review recent developments.

On bilateral relations with Brazil, Davutoglu said Turkey and Brazil had singificant potential in energy and trade, and defined Turkey's opening to Latin America as an important step for Turkey.

Davutoglu said Turkey wanted to make use of Brazil's experiences and regional influence.

"Turkey is launching a political dialogue process with Mercosur (a regional trade agreement among Argentina, Brazil, Paraguay and Uruguay), and will sign a memorandum of understading," he said.

Davutoglu named Brazil as one of important actors that could contribute to Middle East peace process, and said, therefore Amorim had demanded consultations with Turkey before he visited Tel Aviv, Ramallah and Damascus.

Iranian Foreign Minister Manuchehr Motaki will join Davutoglu and Amorim over a lunch during which they will discuss ways to resolve the issue of Iran's nuclear program through diplomacy.