Turkey says it is time for Israel to pay price

The Turkish foreign minister said on Friday that it was now time for the Israeli government to pay the price for its illegitimate acts considering itself above international law and disregarding conscience. 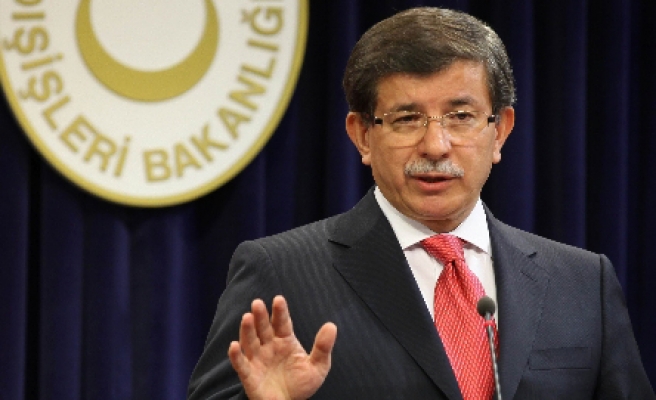 The Turkish foreign minister said on Friday that it was now time for the Israeli government to pay the price for its illegitimate acts considering itself above international law and disregarding conscience.

Speaking to reporters at the Turkish Ministry of Foreign Affairs headquarters in Ankara, FM Ahmet Davutoglu said Turkey's demands were known and its relations with Israel would not go back to normal unless such conditions were met.

Commenting on the Palmer report on Mavi Marmara attack, Davutoglu said the report described the Israeli raid as "excessive and unreasonable" and the deaths and injuries caused by Israeli soldiers as "unacceptable".

"The report also claims that Israel's inhumane blockade against Gaza is legitimate. Turkey, naturally, cannot and does not accept such an approach," the minister said.

Recalling the UN fact-finding mission's assessment describing the Israeli blockade over Gaza as a breach of international law, Davutoglu said the UN Panel's head's exceeding the Panel's authority and presenting different and controversial opinions stemmed from certain political motives, not from legal grounds.

"Turkey does not recognize such kind of an approach that harms the functioning and reliability of the Panel," the minister said.

"We are determined to carry this issue to the relevant international legal authorities," he added.

Davutoglu also said that Israel had wasted all the opportunities presented to it.

"It is now time for the Israeli government to face the consequences and pay a price for its illegitimate acts considering itself above international law and disregarding conscience. This price is, above all things, losing Turkey's friendship. The only responsible party that has carried us to the present conditions is the Israeli government and its irresponsible acts," he said.

Davutoglu also said Friday that Israel's deadly attack on the Mavi Marmara aid ship on May 31, 2010 was not a simple crime.

Davutoglu said that Israel violated international laws with its attack on the Mavi Marmara aid ship.

What was violated was humanity's conscience and the basic humanitarian value of the right to live on May 31, 2010, Davutoglu stressed.

No state is above the laws. The world is changing. Those massacring civilians and commit crimes against humanity sooner or later get tried in in courts of law, Davutoglu said.

Neither the Israeli government who ordered the attack on Mavi Marmara nor those who committed the attack are above international laws. They are all in a position to pay the price for their act in a court of law, Davutoglu also said.

"All postponements of the publication of Palmer Commission's report on the Mavi Marmara attack took place due to the demand of the Israeli government," FM added.

Davutoglu said that Turkey did not accept a proposal made by Israel to postpone the Palmer Commission's report for an additional six months.

It is clear that all efforts to postpone the report are intended to spread the issue on a time table, Davutoglu said.

Touching on the Palmer Commission's report and its leak to the press, Davutoglu said that he spoke on the issue with UN Secretary General Ban Ki-moon.

I have been told by Ban Ki-moon that they did not yet know the details of the report but that they were in deep sadness and shock to see the report in papers, Davutoglu said.