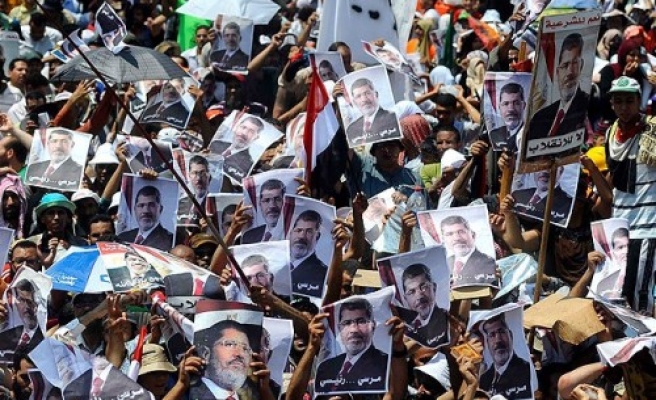 A spokesman for the Turkish Foreign Ministry, Levent Gümrükçü, responding to a question during a press conference, said Turkey still considers Morsi, the first democratically elected president of Egypt who was ousted in military coup in July 3, to be the elected president of the North African country.

Earlier, Prime Minister Recep Tayyip Erdoğan had stated that he considers Morsi the president of Egypt as he was elected by the people of Egypt.

Turkey's relations with Egypt deteriorated after Ankara harshly condemned the coup. Diplomatic ties have worsened when a military crackdown on two anti-coup protest camps in Cairo on Aug. 14 left hundreds of Egyptians dead. Ankara, in protest of the massacre, called its Cairo envoy back for consultations. In response, Egypt also immediately recalled its envoy in Ankara.

In a sign of a thaw, Turkey sent back its envoy to Egypt last Wednesday. However, Egypt has not reciprocated Ankara's move by reinstating its ambassador. The Egyptian side said they will not send the envoy back until Ankara stops interfering in Cairo's domestic affairs.

Egyptian Ambassador to Ankara Abderahman Salaheldin said a “gesture of goodwill” from Turkey would help his reinstatement to his post in Ankara, the Milliyet daily reported on Wednesday.

Salaheldin, who spoke to Milliyet on Wednesday, clarified the reason behind why he has not still returned to his post.

“The first thing is that the need for consultations arose. The second thing is that it is the envoy's show of displeasure about the capital where he is working. ... I must say that relations with Turkey are still very important, yet you will see when you talk to those in Egyptian streets that they have a very bad image of Turkey [in their minds],” Salaheldin maintained.

Gümrükçü refrained from commenting on Salaheldin's remarks, saying that it was the decision of Egyptian officials not to return their envoy.

The envoy added that people of Egypt had an unpleasant image of Turkey as the country hailed the Jan. 25 revolution in 2011 that overthrew the country's dictator Hosni Mubarak, but stood against the “rebellion" against the Muslim Brotherhood. Protests which called for departure of the now-deposed president ended in a military coup on July 3 in Egypt.

Turkey has found itself alone in strongly condemning the Egyptian army's ouster of Morsi and calling it a coup as well as in calling on the Egyptian military to restore the democratically elected government. Ties with Cairo have been strained by severe criticism directed against the coup administration by Turkish officials and a tit-for-tat spat grew between Egypt and Turkey.

“The people of Egypt think today that Turkey has taken sides with the Muslim Brotherhood,” Salaheldin claimed. He went on to say that Turkey should show the country that it is the friend of all Egyptians.

The envoy also stated that although he was trying to return to Ankara, the military-backed government was under pressure from Egyptians to take a stand against Turkey.

Statements by the Egyptian envoy came at a time when a delegation from main opposition Republican People's Party (CHP) is visiting Egypt to have talks with officials from the coup administration and leaders of various political parties.

The CHP delegation, on the third day of the Cairo visit on Wednesday, met with a figure from the Brotherhood, a top Brotherhood negotiator Amr Darrag.

The CHP delegation discussed the latest development in Egypt with Darrag.

The delegation also met with Grand Sheikh of Al-Azhar University Ahmet el-Tayeb. No information was available as to the topics discussed with the country's leading cleric.

Tension between Turkey and Egypt has recently been renewed over Prime Minister Erdoğan's condemnation of Tayeb for his endorsement of the military coup. Erdoğan, stating that he was devastated by Tayeb's stance, had said that history will curse scholars like Tayeb for endorsing the coup.

On Tuesday, the CHP delegation met with Egyptian Foreign Minister Nabil Fahmy. CHP Deputy Chairman Faruk Loğoğlu told Today's Zaman that current bilateral relations and the future of those relations were discussed at the meeting.

“The Egyptian side emphasized the importance of these relations and urged Ankara to be careful in its relations with Egypt in order to avoid the further straining of ties,” said Loğoğlu.

Loğoğlu also added that the future of relations between the two countries depends on the Turkish government's stance towards the interim government in Egypt, adding that Turkey should pursue a neutral and inclusive policy in Egypt.

Fahmy had recently stated that Turkey had demonstrated a hostile attitude, not only by its statements, but also by the actions it took at an international level.