The NATO military campaign in Libya will go on until full security is established, Turkish Foreign Minister Ahmet Davutoglu said on Tuesday. 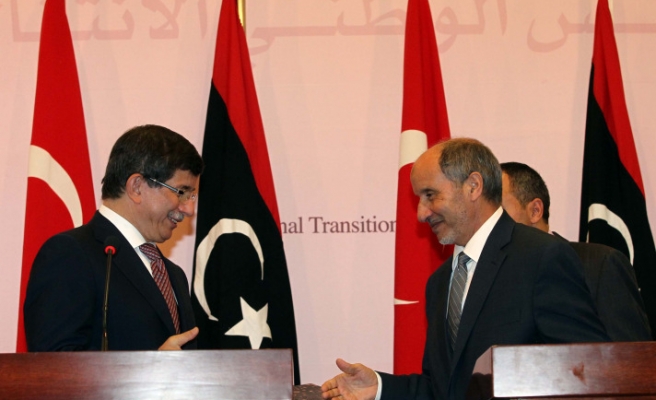 NATO will continue its military campaign in Libya until full security is established in the nation, Turkish Foreign Minister Ahmet Davutoglu said on Tuesday.

Davutoglu also told a news conference in the rebel stronghold of Benghazi that frozen Libyan assets should be released before the end of the Muslim holy month for the benefit of the people.

"Security support provided by NATO forces will continue until security is fully established in Libya. Libya's political and territorial unity must be fully secured," Davutoglu said at the news conference held jointly with Mustafa Abdel Jalil, who chairs the rebel National Transitional Council.

"Frozen assets of Libya should be unfrozen to help Libya before the end of Ramadan," Davutoglu said. "Libyans need financial resources rapidly."

In May, Ankara called on Gaddafi to step down and recognised the rebels now fighting government troops in Tripoli as the legitimate government.

Davutoglu said he had spoken with U.S. Secretary of State Hillary Clinton and 10 foreign ministers from the contact group on Libya on Monday to discuss political, economic and military support for Libya during a transition period.

He said a democratic and free Libya should be built and that the unity of the country must be protected, adding that Turkey would continue its efforts to secure international recognition for the National Transitional Council.

The Libya Contact Group meeting of political directors this week in Istanbul would consider Libya's needs and concrete steps, he added.