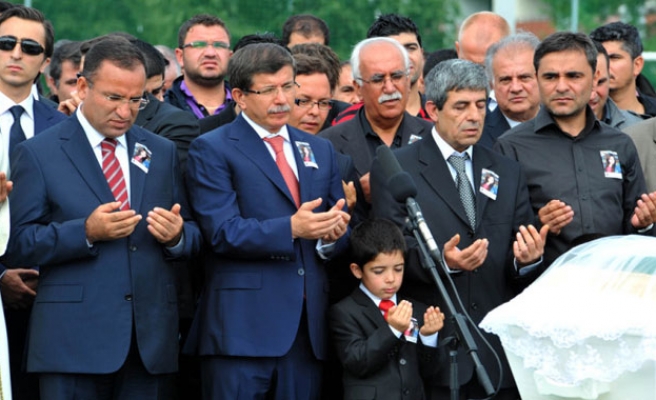 Two Turkish officials, a deputy prime minister and foreign minister, were in Norway on Monday to attend a funeral for a Turkish victim of deadly Norway attacks.

Foreign Minister Ahmet Davutoglu said they travelled to Norway on a special mission to show solidarity with the people of Norway against terrorism.

"Terrorism has no religion or race. We are ready to work together with Norway in fight against terrorism," Ahmet Davutoglu told a joint press conference after his meeting with Norwegian Foreign Minister Jonas Gahr Store in Oslo.

"Terrorism is an enemy of humanity. This is a threat to all of us," he said.

Earlier in the day, Davutoglu and Turkish Deputy Prime Minister Bekir Bozdag took part at the funeral for Gizem Dogan, the 17-year-old Turkish victim of suspect Anders Behring Breivik, who allegedly killed 77 people in a bombing and shooting.

Davutoglu said Gizem Dogan's life was full of lessons for the peoples of Turkey and Norway as she was a success story and a synthesis of both cultures.

Davutoglu also said that he was affected deeply by remarks made by Norwegian Prime Minister Jens Stoltenber who said his country would pass this test. Davutoglu said: "Norwegian people have already passed this test with the spirit of multiculturalism."

"With its spirit of multiculturalism Norway is the best example for the future of humanity," Davutoglu said. "I call on all Turks and Muslims in Norway from tomorrow to give one flower to their Norwegian neighbours showing that this is not an issue of religion or ethnicity but of being human."

Store said Norway would have a wider cooperation with Turkey and other European countries to combat terrorism, adding that Turkey and Norway were thinking the same on all kind of terrorist acts that target civilians.

"Turkey knows that Norway is its ally on this issue and also Turkey is our ally," Store said.

Turkish Deputy Prime Minister Bekir Bozdag said, "we have to work hard to let respect, brotherhood and tolerance prevail in the world."

He offered his condolences to the young girl's family.

"I hope we will never witness such a crime against humanity, such an ideological terror, such a brutality again. This incident has given a serious lesson to the humanity. It proved that ideological blindness can easily turn a human being into a monster.

"We believe that all countries, all nations should take a joint stake against terror," he said.

"We have to cooperate with each other to create a world in which insolence, hatred, enmity and discrimination do not exist," he added.