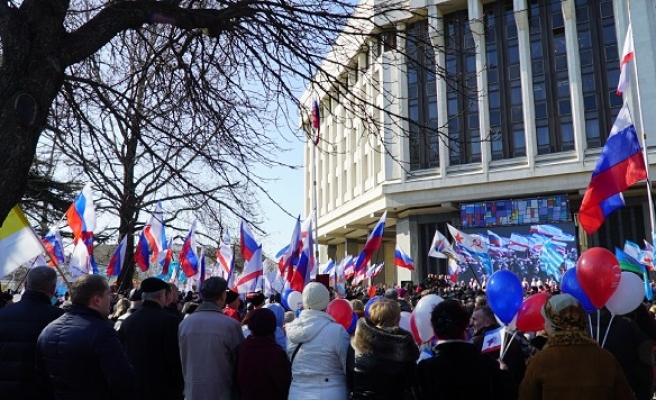 Turkey’s Foreign Ministry said Wednesday that they do not recognize Russia’s continuing annexation of Crimea.

A ministry statement reiterated their rejection of the 2014 referendum on union with Russia.

“We declare this once again, on the second anniversary of Crimea's illegal and illegitimate 'referendum' held on March 16, 2014 that we do not recognize it and the illegal annexation of Crimea by the Russian Federation due to this 'referendum'. And we condemn this act, which is a clear violation of international law, on the occasion of the second anniversary of [Russia’s] invasion.”

The statement added that Turkey “strongly” supports Ukraine’s territorial integrity and sovereignty and that the country’s de facto situation lacks any legal basis for Turkey.

“The human rights situation has been getting worse since Crimea was annexed illegally two years ago. The discriminatory policies, reflected in impartial reports of committees which the international community managed to send to the peninsula, mostly against Crimea Tatar Turks, and various groups in the peninsula and their representatives and the media, are a continuing source of concern. On this occasion we reiterate our call for ending these repressive policies.”

Crimea was annexed by Moscow after an illegal independence vote on the heels of violent anti-government protests in the Ukrainian capital Kyiv that led to the removal of then-President Victor Yanukovich.

More than 9,000 people have lost their lives due to conflict between the Ukrainian government and pro-Russian separatists since April 2014, according to the UN.

Along with many UN countries, the U.S., and the EU, Turkey does not recognize Crimea as Russian territory.

A report by an unofficial Turkish delegation that visited Kyiv and Crimea last April detailed the grave human rights violations against Crimean Tatars ever since Russian annexation.

Crimean Tatars make up roughly 15 percent of Crimea's 2.1 million people. They were deported en masse to Central Asia by Moscow in 1944 before being allowed to return to their homeland in the 1990s as the Soviet Union began to collapse.