Turkey's stance was expressed just one day after masked and armed Russian FSB officers and policemen encircled the Crimean Tatar Mejlis (parliament) building in Simferopol to reportedly conduct a search. 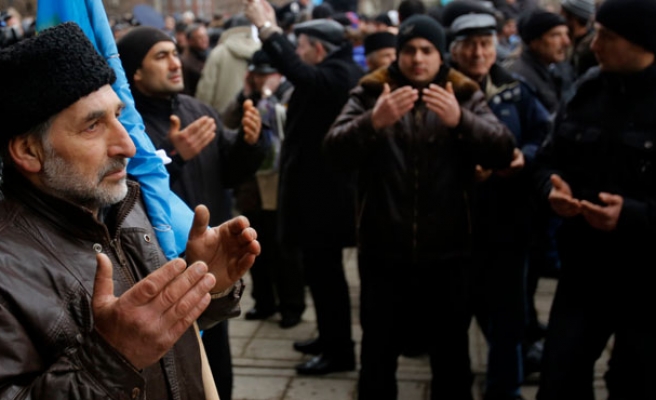 Turkey has announced that it does not recognize the recent parliamentary elections that were held in Crimea, the first election in the peninsula since Russia annexed it in March.

In a statement read out by the Turkish Foreign Ministry spokesperson Tanju Bilgic, it was said “Turkey does not recognize the illegal annexation of The Autonomous Republic of Crimea.”

The statement then went on to say: “Within this framework, ‘elections’ held in the Autonomous Republic of Crimea on September 14, 2014, have no validity for our country.”

Turkey's stance was expressed just one day after masked and armed Russian FSB officers and policemen encircled the Crimean Tatar Mejlis (parliament) building in Simferopol to reportedly conduct a search.

Regarding the raid, Bilgic's statement said: “We condemn such actions that are aimed at suppressing the Tatar community, Crimea's native people, and urge that these actions be ended immediately.”

Crimean Tatar representatives have claimed that the search was conducted after the Crimean Tatar community refused to participate in the parliamentary elections, declaring a boycott of the polls.

“So-called Crimean Tatar representatives, who had to insure Crimean Tatar turnout during Parliament elections on September 14, did not deal successfully with their task,” Mejlis deputy head Ahtem Chiygoz said, adding that this was the reason why the Mejlis building was searched, as well as the homes of Mejlis members.

Dilyaver Akiev, head of the secretariat of the Mejlis, told Reuters by phone, "The policy of mounting pressure on us, on the Mejlis and the community, continues and is growing in force."

"That is to force us to conform with the new authorities, especially now after the elections. But we are not breaking any laws, there are no grounds for any searches," he added.