Turkey said it has sent two fully equipped field hospitals to flood-stricken Pakistan, along with 40 health workers to treat wounded Pakistanis at the hospitals. 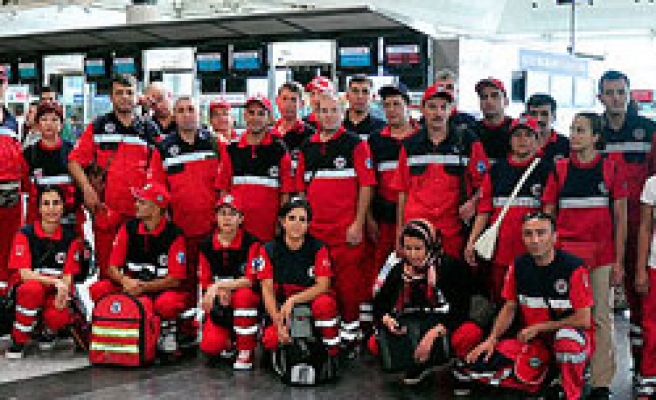 Turkey said on Sunday it has sent two fully equipped field hospitals to flood-stricken Pakistan, along with 40 health workers to treat wounded Pakistanis at the hospitals.
The two hospitals, each manned by health teams comprising 20 members, will be set up in Khairpur and Sibi, a statement from the Ministry of Foreign Affairs said.

Pakistan's worst floods in decades have destroyed villages, bridges and roads, killed up to 1,600 people and made more than 4 million homeless. The Pakistani government says more than 20 million people need shelter, food and clean water.

Meanwhile, a Turkish C-130 military cargo plane dispatched to Pakistan and carrying aid is said to be staying in the flood-hit country for a while to facilitate the transport of aid from other parts of the country. The cargo plane was sent to Pakistan to deliver medical aid to fight against possible outbreaks of malaria and cholera.

Turkey has so far sent $10 million and humanitarian aid worth more than $2 million to Pakistan to help authorities cope with the aftermath of the disaster.

The Turkish Red Crescent (Kızılay), Kimse Yok Mu (Is Anybody There) and the Humanitarian Aid Foundation (İHH) have already sent several cargo planes to the flood-hit regions carrying humanitarian aid in the past weeks.

Turkey is also planning to send supplies to the disaster-hit country by train. In cooperation with Turkish State Railways (TCDD), Kızılay plans to send 500 tons of aid to Islamabad by train.

Furthermore, a Kızılay-sponsored cargo plane carrying 50 tons of humanitarian aid, worth $150,000, including 30 prefabricated houses, rolled beds, blankets, food and fresh water, was expected to arrive in Islamabad on Monday.