Turkish executives, headed by deputy undersecretary of the Foreign Ministry, met deputy prime minister of Kyrgyzstan responsible for recounstruction of the south of the country on Wednesday. 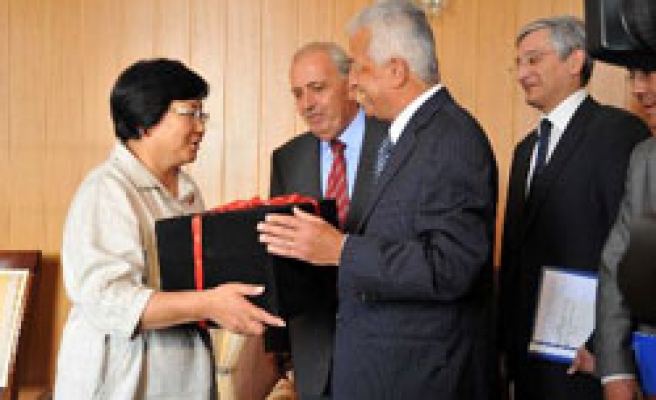 Turkish executives, headed by deputy undersecretary of the Foreign Ministry, met deputy prime minister of Kyrgyzstan responsible for recounstruction of the south of the country on Wednesday.

The delegation, headed by Hakki Akil, and Kyrgyz Deputy Prime Minister Jantoro Satybaldiev gathered together in the province of Osh, which was a scene of ethnic clashes in June.

During the meeting, Turkey's deputy undersecretary Akil said they had been affected negatively by what they had seen in Osh and Jalalabad provinces.

Akil said citizens who were left homeless after the clashes wanted to live in peace, and Turkey would extend monetary assistance to heal wounds in the south of Kyrgyzstan.

Satybaldiev said his country wanted Turkey to re-built more than 300 houses that were demolished and burnt during the incidents in Osh.

Kyrgyzstan had underwent a hard time, and the government was giving priority to provide homeless people with temporary accomodation before winter came, Satybaldiev said.

At the end of the meeting, Turkey decided to make 11 million USD of investments in the region with the coordination of Turkish International Cooperation and Development Agency (TIKA).

Turkey will also extend 10 million USD of assistance to Kyrgyzstan to support efforts to close 619 million USD of budget deficit and to help this country hold general elections due on October 10 in a stable atmosphere.

The delegation later had a meeting with representatives of Meskhetian Turks living in Osh.

The delegation then proceeded to Bishkek to hold more talks with Kyrgyz executives.