Davutoglu said Turkey was reducing its diplomatic presence in Israel and suspending military agreements after details emerged of a U.N. report on an Israeli raid on a Gaza-bound ship that killed nine Turkish activists. 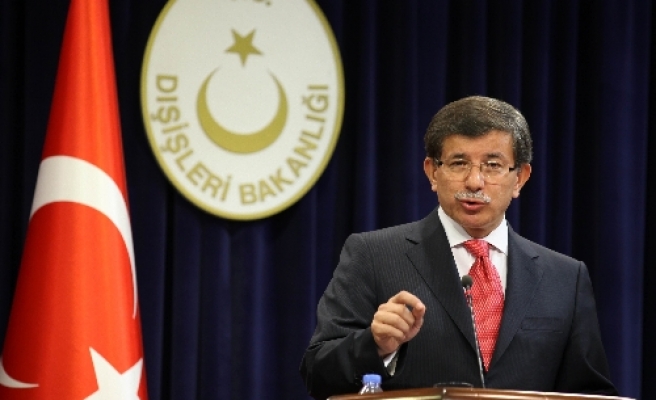 Foreign Minister Ahmet Davutoglu said on Friday Turkey was reducing its diplomatic presence in Israel and suspending military agreements after details emerged of a U.N. report on an Israeli raid on a Gaza-bound ship that killed nine Turkish activists.

Holding a press conference in Turkish capital of Ankara on Friday, Davutoglu said that "until the Israeli government took the necessary steps, it would be out of question to go back from the point reached today".

Minister Davutoglu listed the measures to be taken by the Turkish government vis-a-vis Turkish-Israeli relations.

Within this frame, Turkish-Israeli relations would be downgraded to the level of "second secretary", Davutoglu said.

All officials higher than the second secretary would be sent back to their country on Wednesday, Davutoglu said.

All military agreements between Turkey and Israel have been suspended, Davutoglu said.

Davutoglu said that Turkey, as a country with the longest coastal line in the Eastern Mediterranean, would take every necessary measure pertaining to freedom of navigation.
"Turkey did not recognize Israel's blockade on Gaza and it would demand the blockade to be reviewed by the International Court of Justice," Davutoglu said.

In this direction, we are beginning efforts to call the UN General Assembly to action, Davutoglu said.

We will extend all possible support to the Turkish and foreign victims of Israel's attack while they seek compensation in courts, Davutoglu said.

Turkey represents an understanding that wants peace instead of clashes and justice instead of tyranny. Just as we have raised our voice against the massacres in Bosnia and Kosovo, we have shown our reaction against inhumane attacks on Gaza, Davutoglu said.

The Israeli government has to make a preference today. Those in the administration of Israel have to see that real security lies in the establishment of real peace, Davutoglu said.

They have to understand that the establishment of peace could be possible by not massacring the citizens of a friendly country and rather by strengthening friendship, Davutoglu said.

It is clear that the Israeli government is far from seeing this reality and understanding the results of great changes in the Middle East, Davutoglu said.

I want to stress that the measures we have taken and will take in the future have to do with the attitude of the Israeli government, Davutoglu said.

The United Nations established an inquiry panel to examine the incident. The UN panel's long-awaited report is expected to be handed over to UN Secretary-General Ban Ki-moon today.

Details of the report has been recently leaked to the press as U.S. daily New York Times obtained a copy of the document. Turkish FM Davutoglu described the incident as "a lack of seriousness".