In a joint press conference with European Council's Tusk, PM Davutoglu has said the refugee crisis is not just Turkey’s issue, but the entire world’s issue 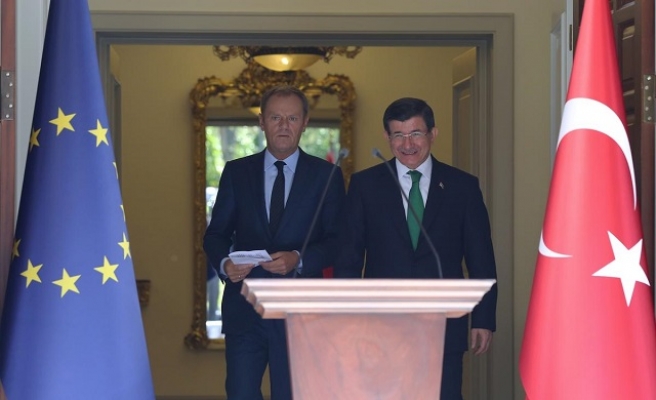 Turkey and EU should adopt a common strategy to deal with the refugee crisis, Turkish Prime Minister Ahmet Davutoglu has said.

Addressing a joint press conference with European Council President Donald Tusk at the Prime Ministry in the capital Ankara Thursday, Davutoglu said that the refugee crisis was not just Turkey’s issue, but the entire world’s issue.

Turkey remains ready to work in concert with its European partners to address the on-going humanitarian crisis, he added.

He reiterated that Turkey was hosting about two million refugees. "We regard the refugees, coming from Iraq, Syria and other places, from a purely humanitarian perspective without discrimination of any kind with respect to race, religion and sect," he said.

The UN refugee agency said recently that at least 850,000 people are expected to cross the Mediterranean this year and in 2016; also, more than half of refugees who reached Europe this year were Syrians.

Davutoglu also spoke about the terrorism issue and said that Turkey conducted "very effective" air operations in northern Iraq on Wednesday and Thursday.

The airstrikes follow the martyrdom of 16 Turkish soldiers in an attack in Daglica on Sunday. On Tuesday, 13 police officers also were martyred in a similar attack in Igdir province.

"We discussed terrorism where I reiterated my condemnation of the recent terrorist attacks here in Turkey…I assured the prime minister, as I did to the president yesterday, of Europe's continued strong commitment to fighting terrorism, from PKK to Daesh," Tusk said.

He discussed the terrorist threat from PKK and highlighted how important it was to get the “solution process” back on track.

Tusk also mentioned the refugee crisis, saying: "Solidarity and unity are our guiding principles. In combination with measures to contain the refugee flows and measures to get back the control of our borders from those profiting from desperation, the smugglers and traffickers of human beings, we can and will handle this crisis as well, just as the European Union has handled so many crises before - and often in cooperation with close partners like Turkey."

He also hoped to strengthen the partnership between EU and Turkey.

"I have come to Ankara at this particular point in time not to lecture and not to be lectured. But to assess the situation together with you and identify areas where our cooperation can be further strengthened. The EU and Turkey are already doing a lot together, but we both agree that more will be needed, on both sides," he said.