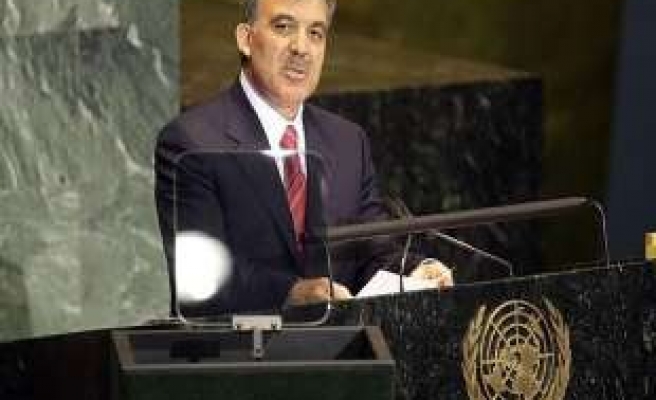 Turkish President Abdullah Gul addressed the delegates during the 68th session of the United Nations General Assembly in New York on Tuesday.

Addressing the delegates during the 68th session of the United Nations General Assembly in New York, Gul underlined that "the agreement to destroy Syria’s chemical arsenal must not allow the regime to avoid responsibility for its other crimes."

Gul began his speech with condemning the terrorist attacks in Kenya, Iraq and Pakistan.

Touching upon the function of the whole UN system, Gul said "We all need a strong, efficient, and credible UN."

Gul added, "We need a UN fit for purpose in the face of current global realities."

The UN of which I speak should be a body capable of taking action to maintain international peace and security, said Gul and continued  "It should be able to safeguard security, justice, and people’s fundamental rights and freedoms."

Criticizing UN, Gul said, "We must realize that inaction by the Security Council only emboldens aggressive regimes."

"We need a Security Council which is truly democratic, representative, effective, and accountable," Gul said.

Giving extra weight on Syria, Gul said "No issue facing us is more pressing than the situation in Syria".

"We cannot forget that chemical weapons were used against Syrian civilians only a month ago," Gul highlighted.

Gul urged, "The perpetrators of this crime against humanity must be held accountable and be brought to justice."

Seeing this agreement on Syrian chemical weapons as an opportunity, Gul said "I hope it will be a first step in the formation of a security architecture to ensure the elimination of all weapons of mass destruction in the Middle East."

"For how long can we afford to evade our moral responsibility to the people being killed even as we speak?" Gul said.

Gul underlined that "The agreement to destroy Syria’s chemical arsenal must not allow the regime to avoid responsibility for its other crimes."

"It is a disgrace that the United Nations Security Council has failed to uphold its primary responsibility in this case," Gul said.

Gul said "What could match the Syrian people’s disappointment as they suffered the worst massacre of the twenty-first century as the international community simply looked on?"

"We must devise and enforce a political strategy led by P5 and the neighboring countries," Gul said.

For Palestine issue, Gul said, "The denial of the right of the Palestinians to have a state of their own has no justification on any moral, political, or legal grounds."

"We welcome and strongly support the talks initiated between the parties under the auspices of the United States," Gul added.

For Israeli role, Gul said, "The success of future efforts mainly depends on the Israeli government’s acceptance of the establishment of a viable, contiguous Palestinian state."

Gul reminded that "Repeated attempts towards a peaceful settlement have ended in failure, including by the rejection of the Annan Plan in 2004."

"We expect the international community to urge the Greek Cypriots to reciprocate by engaging in result-oriented and time-framed negotiations in good faith," Gul underscored.

"Those who must solve this question are the Turks and Greeks of Cyprus," said Gul and added, "they must start negotiating as soon as next month with no ifs or buts."

"The settlement of the Cyprus question is essential to a stable and peaceful Eastern Mediterranean," Gul said.

"Islamophobia has become a new form of racism," Gul said,  "It aims to create an abstract, and an imaginary enemy from the millions of peace-loving Muslims all over the world."

Gul added, "It is essential to strike a balance between protecting freedom of expression and preserving respect for faith."

"Including the contribution of the Turkish NGOs in the fields of health, education, and capacity building Turkey’s total humanitarian assistance reaches 2 billion US dollars per year," Gul noted.

Gul also noted "Our engagement in Somalia is an exemplary case. We have allocated 300 million US dollars so far."

"Turkey is candidate for a non-permanent member seat of the UN Security Council for the term 2015-2016," Gul said.

Gul stressed "If elected, Turkey will bring an independent voice to the Security Council; one that listens to all and tries to find comprehensive and lasting solutions through dialogue."