Turkey, US 'to speed up Syria political transition'

Erdogan and Obama discussed how they could work together to speed up political transition in Syria during a telephone call, Erdogan's office said. 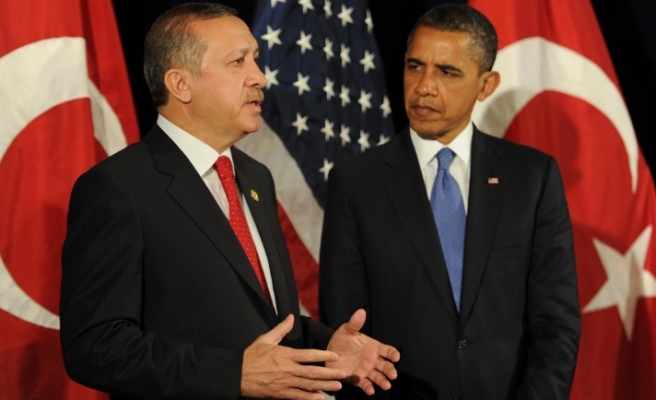 Turkish Prime Minister Tayyip Erdogan and U.S. President Barack Obama discussed how they could work together to speed up political transition in Syria during a telephone call, Erdogan's office said.

Ankara has become a champion of the uprising against Assad's Syrian regime and has given refuge to large numbers of army defectors, who have formed the kernel of a rebel army, as well as tens of thousands of civilian refugees.

In a statement released Monday, the Turkish Prime Ministry Press Office said that Erdogan and Obama agreed for officials of both countries to work closely to support the democratic transitional process in Syria.

The two leaders discussed the coordination of efforts to speed up the political transition process in Syria, including those that would lead Assad to leave power and those designed to meet the legitimate demands of the Syrian people, the press office said.

The two leaders have expressed that they were concerned about the worsening humanitarian situation in Syria and the attacks of the Syrian regime targeting its own people, the press office indicated.

There are about 44,000 Syrian refugees in Turkey and there are concerns that the offensive by Assad's army in the northern city of Aleppo could lead to increasing numbers.

During the phone conversation, Prime Minister Erdogan offered his condolences for those who lost their lives in a tragic incident in Colorado recently, the press office also said.