“We certainly welcome the partnership and alliance that we have with Turkey and look forward to their efforts to join with the international community to meet this threat,” White House press secretary Josh Earnest said. 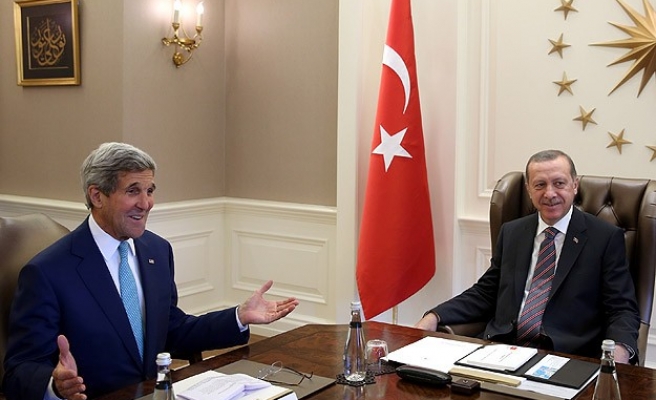 Turkish President Recep Tayyip Erdogan and U.S. State Secretary John Kerry have agreed to continue a joint fight against terrorist groups in the Middle East as before, during their meeting in Ankara on Friday, said Turkish presidential sources.

Kerry came to Turkey on Friday for a two-day trip following his visits to Iraq, Jordan and Saudi Arabia. Saudi Arabia hosted an international meeting to discuss strategies to fight with the so-called 'Islamic State' (IS) group.

A Jeddah communique was signed after the meeting which foresees a coordinated campaign including military measures against the IS. Turkey, for its part, refrained from signing the treaty.

Islamic State, formerly known as ISIL, has captured large swathes of land in Iraq and Syria. Violence instigated by IS militants has displaced an estimated 1.2 million Iraqis.

US waiting for Turkey to join coalition

The White House said Friday that it “looks forward” to Turkey’s effort to meet the threat posed by the so-called 'Islamic State' (IS).

“We certainly welcome the partnership and alliance that we have with Turkey and look forward to their efforts to join with the international community to meet this threat,” White House press secretary Josh Earnest said.

Earnest’s Pentagon counterpart, Rear Adm. John Kirby, said he “expects” that Turkey will become a partner in the effort.

“Our expectation is that Turkey, as a NATO ally, is going – just by virtue of her geography – is going to be a partner in this effort, and they indicated that they would be and that they want to be,” he said. “But it’s up to Turkish leaders and the Turkish people to determine how and when that is manifested.”

Still, Kirby said that he thought Turkey would contribute to the military campaign.

The comments follow Turkey’s refusal to sign the Jeddah Communiqué, which aimed at solidifying support to combat the threat posed by the IS group. Bahrain, Egypt, Iraq, Jordan, Kuwait, Lebanon, Oman, Saudi Arabia, the United Arab Emirates, and the U.S. are all signatories to the joint declaration.

U.S. President Barack Obama announced Wednesday a new strategy to combat the group, saying that a U.S.-led coalition would strike the group throughout the whole of Iraq, and into Syria, a step that the administration had previously been reluctant to take.