Clinton said, that their countries needed to get into detailed operational planning on how to assist the rebels and bring a halt to the violence. 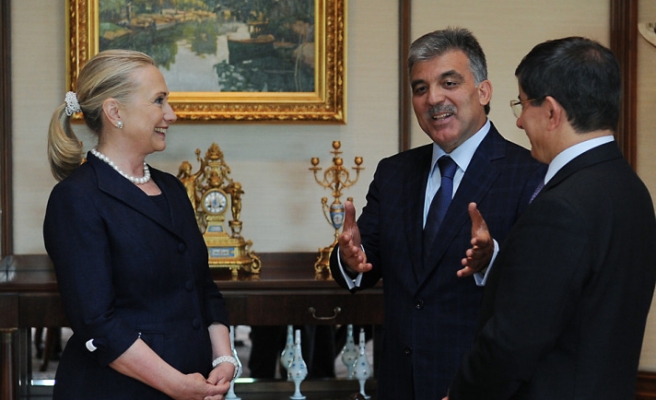 Turkey, the United States are looking at all measures to help Syrian rebel forces fighting to overthrow President Bashar al-Assad, including a no-fly zone, as the conflict there deepens, U.S. Secretary of State Hillary Clinton said on Saturday.

Clinton told reporters after talks with Turkish Foreign Minister Ahmet Davutoglu that their countries needed to get into detailed operational planning on how to assist the rebels and bring a halt to the violence.

Overnight Syrian and Jordanian forces clashed along the border in an incident that highlighted international concerns that the civil war in Syria could ignite a wider regional conflict. The clashes also emphasised the urgent need for planning on what could follow Assad's fall.

"Our intelligence services, our military have very important responsibilities and roles to play so we are going to be setting up a working group to do exactly that," Clinton said.

Asked if such discussions included options such as imposing a no-fly zone over territory that Syrian rebels claim to control, Clinton indicated that was a possible option.

"The issues you posed within your question are exactly the ones the minister and I agreed need greater in-depth analysis," Clinton answered, although she indicated no decisions were necessarily imminent.

The imposition of no-fly zones by foreign powers was crucial in helping Libyan rebels overthrow Muammar Gaddafi last year. But until recently, the United States and its European allies have expressed reluctance to take on an overt military role in Syria's 17-month-old conflict.

The rebels are believed to be getting arms from Saudi Arabia and Qatar but only non-lethal assistance from the United States.

Davutoglu, responding to a similar question on next measures, said it was time for outside powers to take decisive steps to resolve the humanitarian crisis in cities such as Aleppo, which is under daily Syrian government bombardment.

Clinton heard first-hand accounts of the violence in Syria from six female refugees, among some 55,000 sheltering in Turkey in camps along its long shared border. These included a 42-year-old woman who had fled Idlib after Assad's soldiers forcibly evacuated her village and set it on fire.

"We heard their terrible stories," she said. "One woman fled after the regime's forces burned down her village, another came after they broke into her home, beat her and her children."

Clinton also met Syrian students, one of whom told her of his hope the Syrian opposition will be able to present a unified front both inside and outside Syria.

Washington sees Turkey, one of Damascus' harshest critics, as the key player both in supporting Syria's opposition and in planning for what U.S. officials say is the inevitable collapse of the Assad government.

U.S. officials are particularly interested in Turkey's analysis of the political forces emerging as Syria spirals into chaos - hoping that together they can puzzle out the complex patchwork of rebel groups jockeying for position.

Clinton and other U.S. officials have in recent weeks cited rebel gains on the battlefield and the defection of senior Syrian military and political figures, including Prime Minister Riyad Hijab, as signs that Assad's rule is crumbling.

They have also highlighted rebel claims to control a "corridor" from Aleppo to the Turkish border as a potential future opposition safe haven, which could present the United States and its allies with a policy predicament on whether to defend it against government attack.

Clinton said Washington worried about other groups such as the separatist Kurdistan Workers Party (PKK) or al Qaeda exploiting the chaos in Syria to gain a foothold.

Turkey this week accused Assad of supplying arms to the PKK, and Prime Minister Tayyip Erdogan has raised the possibility of military intervention in Syria if the PKK threat increases.

"There is a close link between what is going on in Syria and the latest events in Turkey," Erdogan told his Justice and Development party at a dinner on Saturday, adding that militant attacks were on the rise in Turkey and militants were trying to establish a stronghold in some areas.

Suspected PKK militants ambushed a Turkish military bus in western Turkey on Thursday in an attack that killed one soldier and wounded at least 11 people.

Turkish authorities in the southeast province of Hakkari announced on Saturday that armed forces had completed an almost three-week operation against PKK positions around the region of Semdinli, the scene of fierce fighting.

Erdogan said the PKK had suffered heavy losses and left the area.