﻿Turkey's Erdogan made the request in exchange for its signing of a readmission agreement that allow EU countries to send illegal immigrants to Turkey. 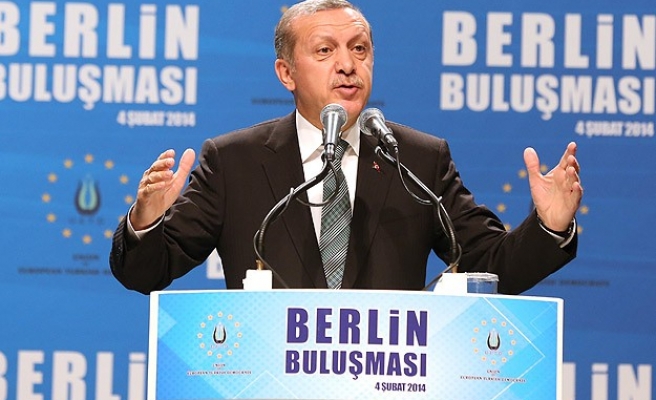 Turkey wants Germany's support in visa exemption talks in exchange for its signing of a readmission agreement that allow European Union countries to send illegal immigrants to Turkey.

Erdogan - talking at a joint press conference with German Chancellor Angela Merkel - wants a deal that would lift visa restrictions on Turks traveling to Europe.

Under the terms of the readmission agreement - signed December 16 in Ankara - Turkey has agreed to take back immigrants who illegally enter the EU from Turkish territory.

Erdogan also thanked Germany for its support during Turkey's EU accession process, saying "Chapter 22 was opened and now chapters 23 and 24, which are blocked by the Greek Cypriot administration, bear importance."

Chapter 23 deals with Judiciary and fundamental rights, and 24 with Justice, freedom and security.

"We are holding talks with France and other countries and we especially need the support of the Chancellor."

Merkel said that she supported unblocking Chapters 23 and 24 and continuing discussions over Chapter 22.

She said the accession talks were "open-ended," expressed some skepticism over full membership for Turkey, but urged that this should not prevent talks from proceeding.

Touching on Germany's Turkish population, Erdogan stated that Turks do not have problems integrating, the proof - he said - being in their ability to play for German football teams at national and club level.

Turkish citizens make up almost 5% of Germany's population, which started to immigrate in 1960s.

Merkel said Turks in Germany have the right to participate in elections, and promised her support to enable them to vote in the upcoming Turkish presidential election.