Turkish President Abdullah Gul said that he believed Hollande's visit will start a new period between the two countries. 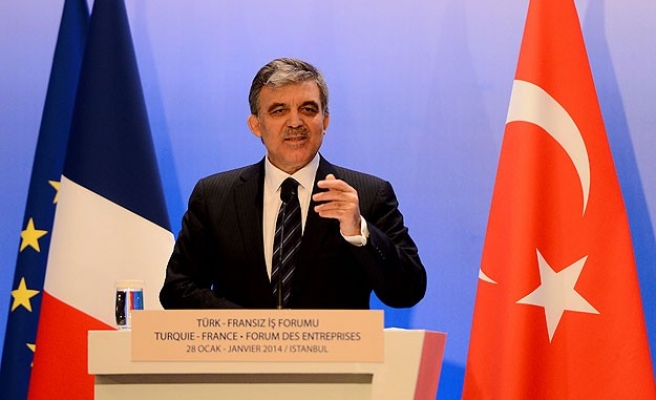 World Bulletin / News Desk
Turkey is ready to enter into a cross-industry partnership with France in order to build a better relationship between the two countries, Turkey's President Abdullah Gul said at the Turkish-French Business Forum meeting in Istanbul on Tuesday.

"Turkey is ready to cooperate with France in every field of industry, including steam power plants and alternative energy sources, as well as tourism, culture, and education, " said Gul.

Speaking after Monday's visit from France's President Francois Hollande, Gul said, "I believe his visit will start a new period between the two countries."

"Bilateral relations between Turkey and France have been interrupted because of some issues not quite related to the very nature of our relations," he said. "Which also affected negatively our economic cooperation. So, we need to have that 'nature' again."

Stressing that Turkey has been in Europe for hundreds of years, the Turkish President said the two countries should maintain the relations in accordance with the historical ties.

Gul highlighted Turkey's economic development during the past ten years. He said: "Turkey has learnt a lot from the crisis in 2001, and since then has made a number of significant reforms in every field. France, with its strong economy and industry, is one of the leading countries which we will enjoy cooperation with."

Gul called on all French and Turkish businesspeople to cooperate in every field but espcially in nuclear energy.

"In terms of trade, we intend to reach €20 billion, which I believe will be very easy for the countries which have no obstacles and prejudices against each other," he said.

Gul stressed that Turky has changed as a country and is hoping to use its recent political and economic progress for negotiations with the European Union.

"The political power in Turkey is steady; we have been making reforms in economy, law, education, and politics; and there's been an upward trend in the popularity of Turkey," he said. "Our country is fully concentrated on having successful negotiations with EU, which will definitely contribute to the investments in trade."