Kilicdaroglu held a series of talks on the first day of his visit to Brussels. 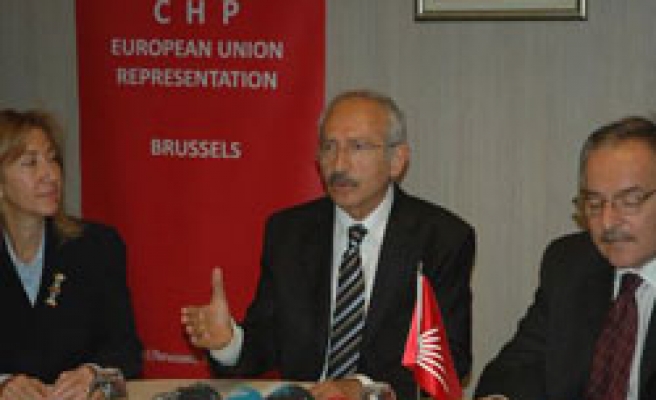 Leader of the main secularist opposition party in Turkey on Wednesday said they would support the drafting of a new constitution in the country if it is based on "genuine universal values."

"We are a party which believes that a culture of compromise is a necessity of democracy. Who could oppose a new constitution if it will be drafted in compliance by genuine universal values," Kemal Kilicdaroglu, head of the Republican People's Party (CHP), told a press meeting in Brussels, where he pays a three-day visit.

CHP strongly campaigned against the reforms in the recent referendum that was approved with 58 percent of "Yes" and 42 percent of "No".

Kilicdaroglu said he expected that discussions over the drafting of a new constitution in Turkey would speed up after general elections in 2011, defending that political parties should not prepare draft constitutions on their own.

Kilicdaroglu held a series of talks on the first day of his visit to Brussels.

He also met with Martin Schulz, chairman of the Socialist Group in the European Parliament and vice chairman Hannes Swododa in Brussels on Wednesday.

After the meeting that lasted for nearly half an hour, Schulz said that it was a fruitful meeting.

Schulz said that they discussed relations between the Socialist Group and CHP in the meeting.

He said the Socialist Group in the European Parliament would keep assisting Turkey in its EU bid, noting that Turkey and EU needed each other.

Regarding the referendum that took place in Turkey, Schulz said choice of democratic majority should be respected.

Schulz also said that he hoped that Turkey would be a member of the EU with a prime minister from CHP.

In his part, Kilicdaroglu said that the Socialist Group and he would meet more often and work to boost ties in the coming period.