Turkey's Erdogan: Libya should stay as entity of the Libyans

Touching on Turkey's would be assistance to Libya, Erdogan said that Turkey wished to construct a new parliament building in Libya. 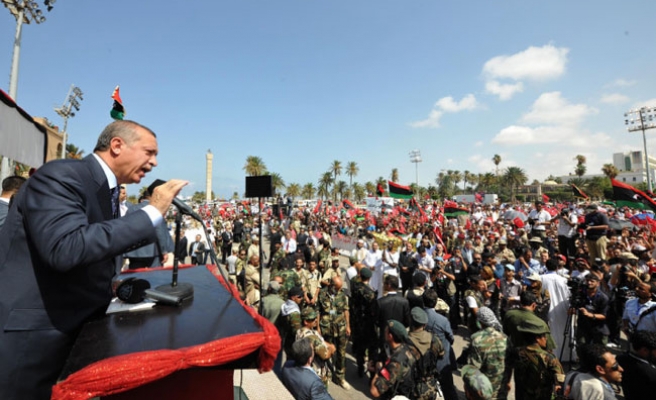 Turkish Prime Minister Recep Tayyip Erdogan said Friday that Turkey will be with Libya in meeting needs in all fields, including politics, military, economy, commerce, infrastructure and superstructure.

Speaking at a joint press conference with Chairman Mustafa Abdel Jalil of Libya's National Transitional Council (NTC), Erdogan said that Turkey will be hand in hand and shoulder to shoulder with the brotherly people of Libya in meeting their needs.

There is currently a struggle taking place in Sirte and Saba. I call on my brothers in these two cities to unite with Tripoli and Benghazi. I call on my brothers to give hand in hand so that there is no more bloodshed and more people do not die. They should all know that what happened in Tripoli and Benghazi will also happen in Sirte and Saba, Erdogan said.

Touching on Turkey's would be assistance to Libya, Erdogan said that Turkey wished to construct a new parliament building in Libya.