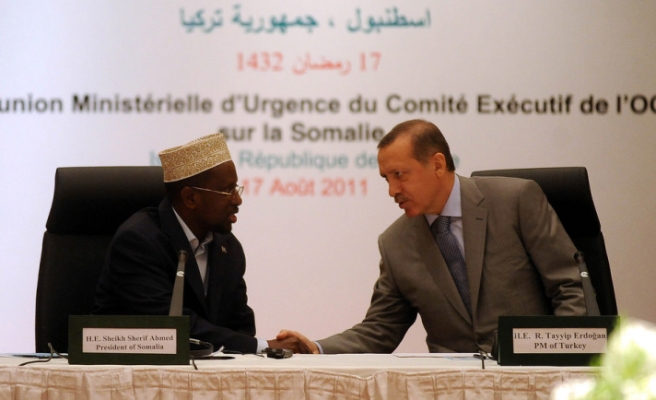 Turkish Prime Minister Tayyip Erdogan appealed on Wednesday for aid for drought-struck Somalia, criticising millionaires who drive luxury cars and the Western world's arrogance for ignoring the plight of the poor.

In a speech sprinkled with references to Islamic piety and criticism of Western capitalism, Erdogan told the Organisation of the Islamic Conference (OIC) the famine in Somalia was "a litmus test" not only for Muslims but for the whole of humanity.

"If you ride a luxury car you should be generous enough to people who are struggling with hunger," Erdogan told foreign ministers from the 57-nation OIC at an emergency summit in Istanbul to galvanise support for Somalia and drought-struck neighbouring regions.

"I hope the efforts (of the OIC) will mobilise the sleeping consciences. We hope the Western world, which likes to boast about its per capita income, shows its support for Somalia."

Muslim Turkey, a rapidly growing economy and multi-party democracy that has applied to join the European Union, is widely regarded as a model for growth for countries in the Muslim world and in the developing world.

The OIC summit, held during the Muslim fasting month of Ramadan, also offers host Turkey a chance to show its commitment to Africa when other emerging powers are scrambling for trade and investments in the resource-rich continent.

Erdogan, a pious Muslim who fasts during Ramadan, used his 30-minute speech to burnish his image as a hero among many Muslims, a status he has gained for his criticism of Israel and calls for Palestinian statehood.

"What can we say to people on the other side, making trillions of dollars, capitalising on others? What kind of civilisation is this?" he said, raising his voice at times.

"We come from the community of the Prophet, who says you cannot sleep peacefully if your neighbour is hungry. The Somali people are looking at us. Can we turn our gaze away?"

Erdogan will travel to Somalia on Thursday with his family. He plans to visit relief camps and will be joined by Foreign Minister Ahmet Davutoglu and his family.

Visits by foreign dignitaries are extremely rare in Somalia, which is plagued by war, anarchy and the risk of starvation among some 3.7 million Somalis.

Turkey is behind other emerging countries such as China, Brazil and India in the race for new markets in Africa, but under Erdogan's AK Party government, Turkey has boosted trade with the continent and opened several new embassies there.

Davutoglu later heads to South Africa and Ethiopia as part of an African tour aimed at raising Turkey's diplomatic presence in the continent and expanding business ties.

Erdogan, who recounted stories of Somali refugees forced to leave behind their dying children on days-long treks to relief camps, said Turkey would open six field hospitals in Somalia and send 20 tonnes of medication and 10 tonnes of food.

Ahmed said that it was crucial for them to see Turkey shoulder to shoulder at this difficult period Somalia was going through.

Somalia faces diseases and famine. Our brothers and sisters (in Turkey) have extended a helping hand. They are working so that the tragedy of the Somali people ends, Ahmed said.

"I would like to thank the brotherly country of Turkey on behalf of my people and I. It is important for us to see the helping hand of Turkey. I call on all the countries of the world to follow Turkey. We will never forget your efforts," Ahmed also said.