"We have assessed hunger problem in Africa, particularly in Somalia, Kenya and Ethiopia and humanitarian tragedy caused by hunger," Davutoglu said. 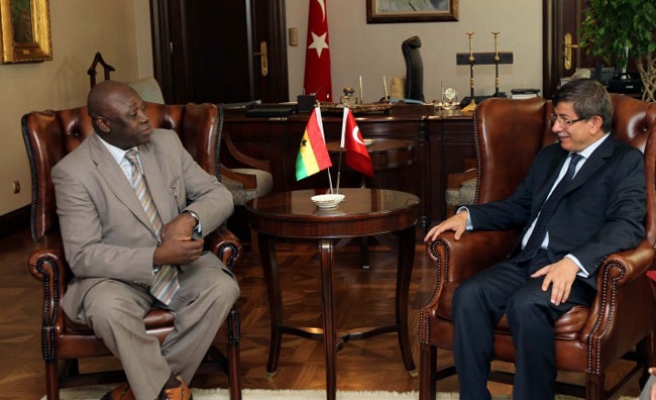 Turkey's foreign minister will pay a visit to Africa towards the end of August.

"We have assessed hunger problem in Africa, particularly in Somalia, Kenya and Ethiopia and humanitarian tragedy caused by hunger," Davutoglu said.

"I was planned to visit Ethiopia on August 19 earlier to meet with Ethiopian executives and African Union President Jean Ping and later proceed to South Africa. Taking into consideration the developments on hunger problem, I may add some other countries to my visit to discuss both the hunger problem and Libyan issue," Davutoglu said.

"We have discussed what we can do on these issues. We have always supported our African friends and we will do so in the future. African Union and Ghana always supported Turkey on international matters," he said.

Referring to the visit of Turkish President Abdullah Gul to Ghana in March, Davutoglu said, "we have the opportunity to make a comprehensive political consultation with Ghana's foreign minister in line with the decisions made during the visit."

Davutoglu said Turkey inaugurated an embassy in Ghana, underlining that Ghana was planning to open an embassy in Turkey soon. He also said Turkish Airlines had scheduled flights to Acra four times a week. "Thus a very important link has been established between Turkey and Ghana," he said.

Commenting on the students from Ghana that get education in Turkey, Davutoglu said they would be the representatives of Turkey when they return to their country.

Mumuni in his part pointed to positive political and economic relations between Turkey and Ghana noting that the relations were established on the basis of common values.

Mumuni said the common values were democracy, rule of law, human rights, as well as fair and transparent elections and progress of economy.

Mumuni said relations between Turkey and Ghana could be example to other countries, indicating that Turkey was one of the countries recognizing Ghana after it gained independence in 1957.

Referring to visit of President Gul to Ghana, Mumuni said various bilateral agreements were signed during the visit. He said Ghana wanted to boost cooperation with Turkey.

Mumuni said he paid a semi-formal visit to Turkey, noting a Turkish NGO invited him to Turkey.

Mumuni said Ghana would be one of the 10 most rapidly growing economies in the next 10 years, and added that they launched works in Ghana to better investment environment.

He said Ghana wanted Turkish businessmen to invest in Ghana.