Turkey's foreign minister held bilateral talks on the sidelines of the 65th session of the United Nations General Assembly in New York. 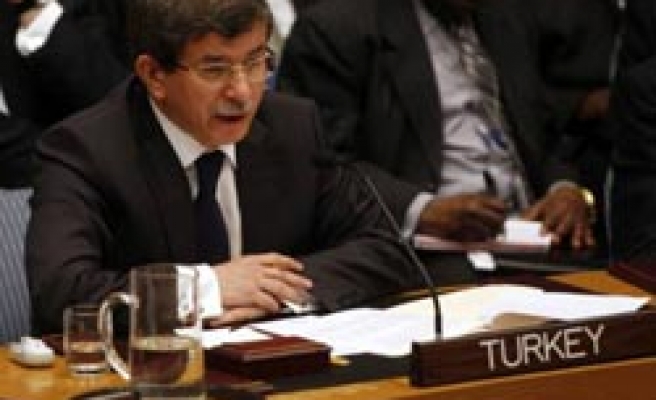 Turkey's foreign minister held bilateral talks on the sidelines of the 65th session of the United Nations (UN) General Assembly in New York, the United States on Monday.

Davutoglu later met his Albanian counterpart Edmond Haxhinasto. The ministers focused on Kosovo and recent situation in the Balkans.

In his meeting with Ecuador's Foreign Minister Ricardo Patino Aroca, Davutoglu debated bilateral relations and the visit Ecuador's president was planning to pay to Turkey in October 2011.

Davutoglu and Aroca said they would cooperate in climate change and South American common market MERCOSUR, whereas Aroca expressed his country's willingness to open an embassy in Turkey.

Davutoglu took up the contents of the Turkey-Cooperation Council For The Arab States of the Gulf (GCC) meeting to take place in Kuwait in October, the recent situation in the Middle East and developments regarding Iran in his meeting with Al Khalifa.

Minister Davutoglu later received United Nations Relief and Works Agency for Palestine Refugees in the Near East (UNRWA) Commissioner-General Filippo Grandi, who referred to situation and problems in Gaza and asked for Turkey's support to raise UNRWA's budget.

Davutoglu also had a meeting with Richard Holbrooke, the U.S. special representative for Afghanistan and Pakistan, with whom he debated Turkish-Pakistani relations, the flood disaster in this country and recent developments in the region.

Davutoglu's other meeting was with his Chinese counterpart Yang Jiechi. The two ministers discussed bilateral relations, developments in Asia, and details of the visit Davutoglu was planning to pay to China in November.

Pakistani Foreign Minister Makhdoom Shah Mehmood Qureshi was another UN General Assembly participant with whom Davutoglu had a bilateral meeting. The ministers debated urgent needs of Pakistan in the wake of a flood disaster.