Earlier, Erdogan said that Turkey would shape up upcoming process according to the response it saw from Syria during Davutoglu's visit. 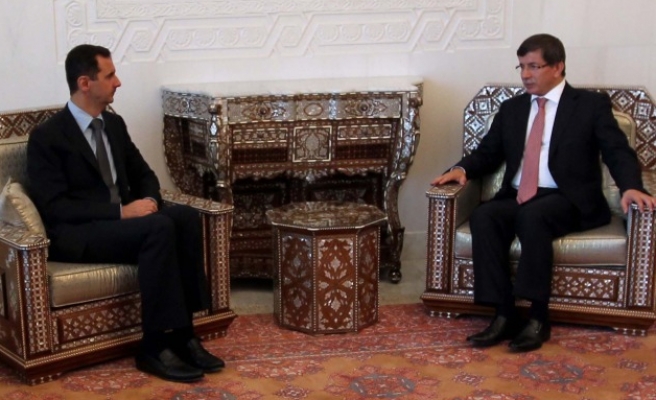 After the talks between the delegations of the two countries, Davutoglu and al-Assad had a tete-a-tete meeting on Tuesday.

The tete-a-tete meeting lasted for two hours and 15 minutes.

Davutoglu did not make a statement after the meeting.

Davutoglu is in Damascus to convey Turkey's views and messages regarding the crisis in that country.

Earlier, Prime Minister Recep Tayyip Erdogan said that Turkey would shape up upcoming process according to the response it saw from Syria during Davutoglu's visit.

Syria's president faced a chorus of global reproach, with envoys from India, Brazil and South Africa also heading to Damascus to press for an end to the violent crackdown on a five-month-old uprising.

The visit by Turkish Foreign Minister Ahmet Davutoglu was significant because Turkey until recently had close ties to Damascus. But Ankara has become increasingly critical of its neighbor over the bloodshed.

Turkey's state-run news agency confirmed that Assad was meeting Davutoglu, but there were no details.

On Monday, U.S. Ambassador in Ankara Francis J. Ricciardone met Ibrahim Kalin, chief advisor to Prime Minister Erdogan, within the scope of the consultations on Syria.

Also, U.S. Secretary of State Hillary Clinton spoke on the phone with Davutoglu, discussing the ongoing violence and security operations in Syria.

"They did talk about the situation in Syria, you know, and we believe it's another opportunity to send yet another strong message to Assad that this crackdown on peaceful protesters cannot stand," Toner said Monday.

India's U.N. Ambassador Hardeep Singh Puri said his country's representative is scheduled to arrive in Damascus on Tuesday and will join representatives from Brazil and South Africa for a meeting with Syria's foreign minister to appeal for an end to the crackdown and to promote democratic reforms.

The Syrian regime has shown no signs of scaling back its crackdown despite Damascus' increasing diplomatic isolation. Saudi Arabia, along with Bahrain and Kuwait in the Gulf, recalled their ambassadors this week.

In an editorial published Tuesday, the Al Baath newspaper of Syria's ruling Baath party said the regime was hopeful that Turkey and the Gulf Arab nations will "quickly correct their stands."

Syrian forces killed at least five civilians and moved into a town near the Turkish border on Tuesday, activists and witnesses said.

The anti-Assad Syrian Revolution Coordinating Union said two sisters, aged 6 and 11, were among five bodies brought to a hospital in the town of Tibet al-Imam after military raids on villages around the besieged city of Hama.

Despite growing international condemnation, including a sudden wave of Arab criticism, Assad's forces also continued an offensive in the eastern city of Deir al-Zor.

Last week Assad sent troops and tanks to quell the mostly Sunni Muslim city of Hama in central Syria and the army launched a similar assault on Sunday against Deir al-Zor.

Witnesses said armoured vehicles entered the town of Binnish, 30 km (20 miles) from the Turkish border, at dawn on Tuesday. "The whole town has been joining in night rallies (against Assad) after Ramadan prayers," a resident said.

An armoured column also pushed towards the centre of Deir al-Zor, with troops storming houses and making arrests on the third day of an offensive on the provincial capital of an oil region bordering Iraq's Sunni heartland, a resident said.

"They are now about one kilometre from downtown. When they finish with one district, they move to another," said the resident, who gave his name as Iyad.

Turkish Prime Minister Tayyip Erdogan has described Syria's uprising as a domestic issue for Turkey, because of their 850 km (530 mile) shared border.

Increasing the pressure on Assad, Sunni Muslim power Saudi Arabia issued a blunt warning that he risked turmoil unless he stopped the bloodshed and adopted reforms. Kuwait and Bahrain followed the kingdom in recalling their ambassadors.

In Deir al-Zor, a resident said on Monday 65 people had been killed since tanks and armoured vehicles barrelled into the city, 400 km (250 miles) northeast of Damascus on Sunday.

The British-based Syrian Observatory of Human Rights said among the dead were a mother and her two children, an elderly woman and a girl. Syria has expelled most independent media since the revolt began, making it hard to confirm accounts.

Syrian authorities have denied that any Deir al-Zor assault took place. The official state news agency said "not a single tank has entered Deir al-Zor" and reports of tanks in the city were "the work of provocateur satellite channels".

The authorities say they have faced attacks since the protests erupted in March, blaming armed saboteurs for civilian deaths and accusing them of killing 500 security personnel.

State television broadcast footage on Sunday of mutilated bodies floating in the Orontes river in Hama, saying 17 police had been ambushed and killed in the central Syrian city.

The official SANA news agency said on Monday the military was starting to pull out of Hama after it said they had helped restore order. Residents said there were still tanks in parts of the city and security forces were making arrests.

About 1,500 people were detained in Hama's Jarajima district and troops killed three civilians, the Observatory said.

Activists say at least 130 people were killed in Hama, where Assad's father crushed an armed Islamist uprising in 1982, and one group has put the death toll at over 300.

Like most of Syria, ruled by Assad's minority Alawite family, Hama and Deir al-Zor are mainly Sunni cities, and the crackdowns there resonate with Sunnis, who form the majority in the region and govern most Arab countries.