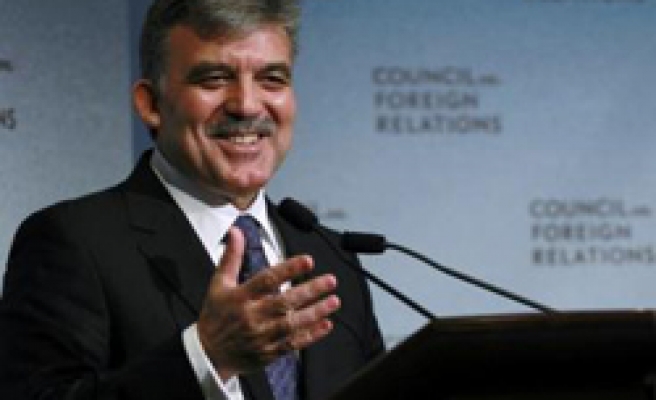 Gul, speaking to the Council on Foreign Relations while attending the U.N. General Assembly meeting, ruled out criticism that Turkey was shifting its orientation away from the West by engaging with Iran.

"If you look at all our allies, which leaders among those countries have the ability to be able to have direct discussions with the Iranian leaders, including the supreme religious leader?" Gul asked.

"There isn't anyone," he said, adding its engagement is for moving the process forward and should not be misunderstood.

"As was the case in the past, Turkey is and will remain a strong committed and reliable ally of the United States," he said.

"Because if a war erupts, it will happen in our region," he said.

No toleration to nuclear weapon

In July, the United Nations Security Council agreed to additional economic sanctions against Iran. Twelve of the council's 15 members voted to approve the UN resolution. Turkey and Brazil both voted against the resolution, while Lebanon abstained.

Gul said Turkey's "no" vote helped make progress in the way of diplomacy for settlement of Iran's nuclear issue. Reiterating that Turkey is against nuclear weapons in its region and cannot tolerate such weapons in this part of the world, Gul said, however, Turkey would of course abide by UN resolution.

Gul went on saying, "however, we are an energy-dependent country. We import 98 percent of our gas and oil need."

U.S. and European officials have claimed that Turkey has allowed Iranian banks with suspected links to Iran's nuclear program to do business within its territory.

Gul said the U.N. sanctions were taken as a binding decision and we abide by those sanctions.

"Countries imposing other sanctions beyond the sanctions of the United Nations, that is where we find ourselves in a more difficult position," he said.

"Our policies must also take into consideration our national interests as well," he added.

Gul once again criticized Israel's actions in its deadly raid on a Gaza-bound aid flotilla that U.N. investigation probe branded as "wildful."

On Turkey's European Union accession talks, Gul said the country remains committed to completing the process despite slow progress that he blamed on Europe.

"Europe today lacks a strategic vision, a strategic perspective of what it wants to be 50-60 years down the road," he said.