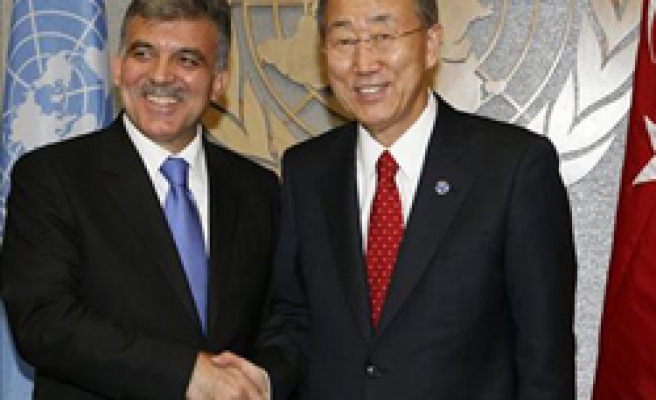 In a written statement on today's meeting between Ban Ki-moon and Gul, the UN said that the two leaders discussed many issues, including the Middle East, Afghanistan, Iraq and Cyprus.

Ban Ki-moon praised Turkey's diplomatic leadership and active participation in crucial regional issues, including Western Balkans and the Middle East, and encouraged Turkey to continue to extend assistance so as to preserve the momentum in Cyprus negotiations, the UN said.

"The UN secretary general voiced admiration for Turkey's heightened diplomatic profile and he thanked Turkey for its efforts for international and regional peace and stability," sources have said.

Sources have said the Turkish president had underlined the importance Turkey attached to a UN panel investigating Israel's deadly raid on a Gaza-bound aid convoy that killed nine people, expressing Turkey's expectation that the provisions of the international law be uphold.

Sources have said Ban and Gul also discussed the Cyprus issue, exchanging views over the current state of settlement talks on the island as the Turkish president had re-affirmed that Turkey would continue to work with the UN to make progress in the settlement process.