Turkey's PM in Macedonia for talks 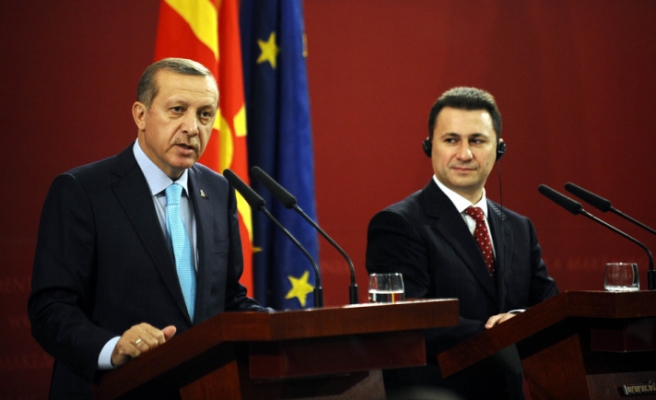 Turkey's prime minister said on Thursday that he saw Macedonia as an important actor for maintaining peace, stability and prosperity in the Balkans.

"Turkey has always supported Macedonia, particularly its bid to integrate to Euro-Atlantic institutions, since it gained its independence, and will continue to do so," Erdogan told a press conference before he left Ankara for Macedonia.

Erdogan said, "I have full belief that my visit will take place in a sincere and friendly atmosphere, and it will add a new momentum to Turkish-Macedonian cooperation."

Premier Erdogan said he would exchange views with Macedonian executives on recent developments in the Balkans as well as regional and international topics closely concerning the two countries.

Erdogan defined Turkish-Macedonian relations as perfect, and Turkish kinsmen living in Macedonia and Macedonian people living in Turkey were establishing a bridge between the two countries.

"Besides our political relations, I will have the opportunity to debate economic, commercial, cultural, educational, defense and security issues during my visit, and seek ways to boost our relations and cooperation," he said.

Erdogan said Turkey and Macedonia were sharing a common history and culture for almost six centuries.

Premier Erdogan said he would have the opportunity to meet Turkish people living in Macedonia and listen to their expectations and demands.

Erdogan referred to the Ohri Framework Agreement which envisaged rightful representation, and said he would learn about projects and steps for representation of Turkish kinsmen in public institutions, particularly local administrations, and their employment and education.

During his visit, Erdogan will visit Skopje Airport, constructed by Turkish TAV construction firm, together with his Macedonian counterpart Nikola Gruevski.

Later, Erdogan and Gruevski will have a tete-a-tete meeting, which will be followed by a joint press conference. Premier Erdogan will be received by Macedonian President
Gjorge Ivanov, and attend a working luncheon to be hosted in his honor by Ivanov.

The Ohrid Framework Agreement was the peace deal signed by the government of the Republic of Macedonia and ethnic Albanian representatives on August 13, 2001. The agreement ended the armed conflict between the National Liberation Army and the Macedonian security forces and set the groundwork for improving the rights of ethnic Albanians.

The Agreement also included provisions for altering the official languages of the country, with any language spoken by over 20% of the population becoming co-official with the Macedonian language on municipal level. Currently only Albanian with an approximate 25% of the population fulfils this criterion.