Turkey's president said on Sunday that Turkey's aim was to end terrorism in a first comment over alleged talks between intelligence officials and PKK. 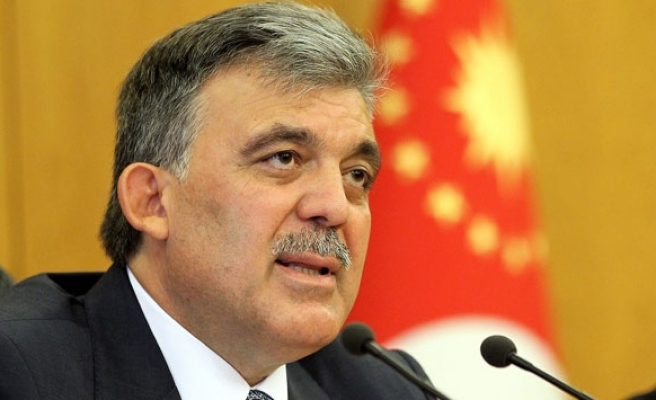 Turkey's president said on Sunday that Turkey's aim was to end terrorism in a first comment over alleged talks between intelligence officials and PKK.

President Gul's remarks came after some news reports regarding talks between Turkish National Intelligence Organization (MIT) and the militant PKK.

An almost 50-minute voice recording revealed that National Intelligence Organization (MİT) Undersecretary Hakan Fidan joined in the meeting as the "special envoy of Turkish Prime Minister Recep Tayyip Erdoğan." At the time Fidan was serving as the deputy undersecretary of the Prime Ministry and had not yet been appointed as the head of MİT. Deputy Undersecretary Afet Güneş represented the intelligence organization at the meeting. Senior PKK leaders Mustafa Karasu, Sabit Ok and Zübeyr Aydar met with government representatives under the mediation of a representative from an unknown "coordinator country."

The voice recording was posted online on video sharing website vimeo.com late Monday night and was later shared by pro-PKK news agencies before being withdrawn.

President Abdullah Gul said "government officials resorted to all methods to eradicate terrorism within the framework of a strategy".

"Intelligence units also fulfil their responsibilities in this respect," Gul told a press conference in Istanbul before he flew to Germany.

Gul said it was natural for intelligence unit to be involved in such an important issue.

Many experts believe the leak was the latest attempt to influence Turkish public opinion against the government. Yasin Aktay, director of the Institute of Strategic Thinking (SDE), said the attempt will backfire. "Some say this would finish the government, but I do not agree. This is quite normal if you want to end the bloodshed," he said.

The ruling Justice and Development Party (AK Party) deputy Şamil Tayyar pointed the finger at Israel as the source of the leak. Stressing that Israeli intelligence services have influence in both the PKK and MİT, Tayyar said, "Turkey's new foreign policy made Israel quite uncomfortable." He also said the timing was important as it coincided with the visit of the Turkish prime minister to Egypt. "This is a plot against the government. Whether the PKK or MİT leaked this voice recording, I would not be surprised if Israel was somehow involved behind the scenes in this operation," Tayyar explained.

Ankara has downgraded diplomatic relations with Israel and suspended defense trade following the Israeli refusal to apologize for its deadly 2010 assault on a civilian ship challenging its Gaza blockade in which nine Turks were killed.