The 10th Summit of Heads of State of Turkish Speaking Countries in Istanbul ended after signing of a declaration. 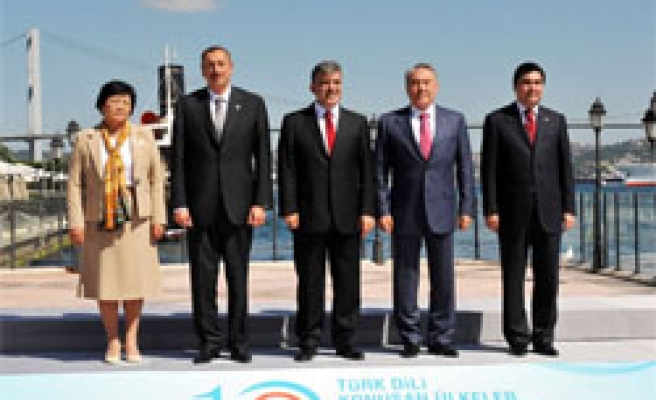 The 10th Summit of Heads of State of Turkish Speaking Countries in Istanbul ended after signing of a declaration.

During the summit, the leaders agreed to appoint Turkish diplomat Halil Akinci as the first Secretary-General of the Secretariat who would officially assume his responsibilities following the entering into force of the Nakhchivan Agreement.

During last year's summit in Nakhchivan on October 3, 2009, the leaders signed an agreement about establishment of the Council of Cooperation of Turkish Speaking States.

The headquarters of the Council will take place in Istanbul.

The leaders also decided to celebrate the signing day (3 October) of the Nakhchivan agreement as the Turkish Speaking States Cooperation Day.

They confirmed the importance of putting into practice the initiative aiming at establishment of a special foundation for support of Turkish culture and preservation of Turkish heritage in Baku in order to preserve the rich Turkish cultural heritage.

The leaders stated that they would promote the establishment of a union among universities to support the studies of the Turkish Academy in Astana.

They decided to celebrate the 20th anniversary of the independence of Azerbaijan, Kazakhstan, Kyrgyzstan, Uzbekistan and Turkmenistan in 2011 through joint activities.

Accordingly, they welcomed the proposal of Turkmenistan to organize a Turkish Speaking States cultural festival in Ashkhabad in 2011.

The leaders also expressed their satisfaction about the successful completion of the referendum in Kyrgyzstan on June 27, 2010. Highlighting importance of the parliamentary elections on October 10 for regional peace and stability, they confirmed that they would continue to support Kyrgyzstan during this transitional period.

The leaders invited international community to actively participate in the International Donor Conference for assistance to Kyrgyzstan to be organized by Kazakhstan in Almaty.

They expressed their deep regret over the raid of Israel to the humanitarian aid convoy sailing in international waters on May 31, 2010, causing the death of nine innocent civilians.

The leaders emphasized the importance of the settlement of the disagreement concerning the nuclear programme of Iran through dialogue and diplomacy for regional and global peace and stability.

The leaders also agreed to establish Turkish Speaking States Business Council in order to foster economic cooperation and decided to explore the possibility of the establishment of the 'Turkic Speaking States' Development Bank' in Istanbul and a joint Insurance Company in order to support development of non-oil sectors and create new opportunities for private sector.

The first summit of Turkish Speaking Countries Cooperation Council will be held in Kazakhstan in 2011 and Kyrgyzistan will host the second summit in 2012.