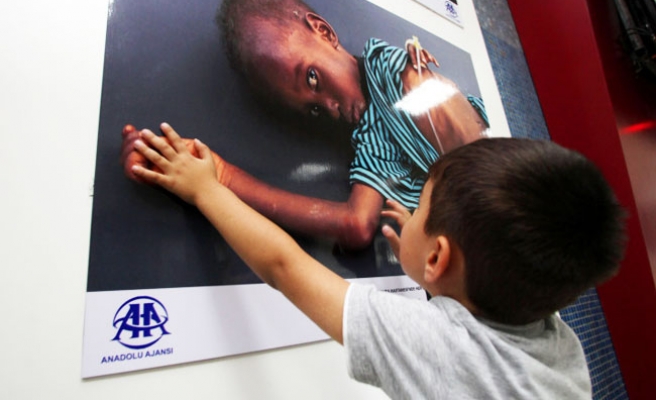 Anadolu Agency's (AA) exhibition on "Being a Human in Somalia" has received great interest from people of Ankara.

"I have once more noticed that we are living a luxurious life when I looked at the photographs," one of the visitors, Pervin Kutlu, said.

Kutlu said the entire world should take lessons from the tragedy of humanity in Somalia.

Also sharing his feelings, a retired officer, Ibrahim Fatih Yettigil said the photographs were more impressive that the images on TVs.

Yettigil said nobody should remain indifferent to what was going on in Somalia and other African countries, whereas a teacher, Ayse Ozuyilmaz, said the photographs were as striking as to hurt people and she believed the exhibition would draw attention of people to desperation, poverty and thirst in Somalia.

"I am thinking about our humanity, and how wasteful we are," said another visitor Zahide Kaynak.

Moreover, Emine Gulener said, "I have once more seen how a wasteful nation we are, and how valuable the food and beverages we are throwing away are."

Photographs taken by AA photo reporters in Somalia reflecting the tragedy of humanity in that country are on display at the exhibition.

Assistance to be collected by the Turkish Red Crescent from visitors will be sent to Somalia.

The exhibition will be inaugurated at the Turkish Parliament on October 4.

It will later be opened in Istanbul and Aegean province of Izmir.