Pilots notified concerned authorities about the coordinates of the attack, and NTC executives are investigating whether Gadhafi forces staged the attack. 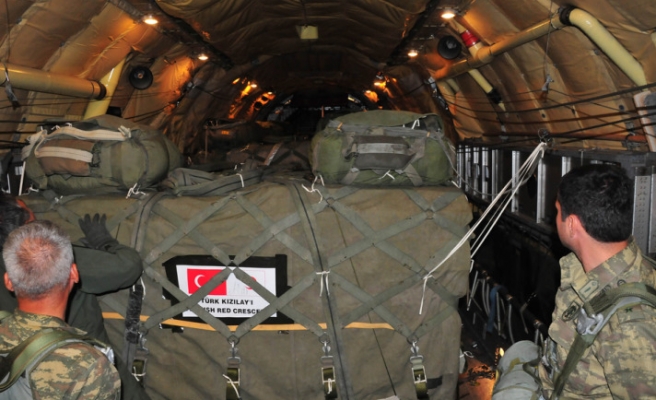 Turkey started to parachute aid to Libya under a decision made during Premier Recep Tayyip Erdogan's visit to this country.

Turkish and NTC executives decided to parachute the aid to Waddan, south of Sirte, and Libya's border across Niger early on Sunday.

One of the pilots said 18 military officers would take part in the aid campaign.

"We are honored to perform such an abroad operation for the first time since Cyprus Peace Operation," pilot Murat Mocan said.

Mocan said 22 tons of foodstuff were planned to be parachuted, however only 14 tons would be distributed at first and the rest could be parachuted in coming days.

One of the cargo planes that took off from Benghazi Military Airport at 5 a.m. on Sunday parachuted foodstuff to the south of Qatrun, near Libyan-Niger border and returned to the airport.

The second plane that took off from the same airport at 6 a.m. also carried AA team, who is actually based in Benghazi.

The plane reached Waddan at the end of an hour of flight, and parachuted the aid. However, it was the target of anti-aircraft when it was returning to the military airport.

Then, the plane changed its route, accelerated its speed and returned to the military airport. Experts said the plane was not hit during the attack.

They said anti-aircraft directly targeted the wings, but the plane could save itself with a rapid manoeuvre as it had emptied its cargo.

Pilots notified concerned authorities about the coordinates of the attack, and NTC executives are investigating whether Gadhafi forces staged the attack.