Ozdil Nami says he hopes 2015 will be the year for a solution over the long-standing problems over the island. 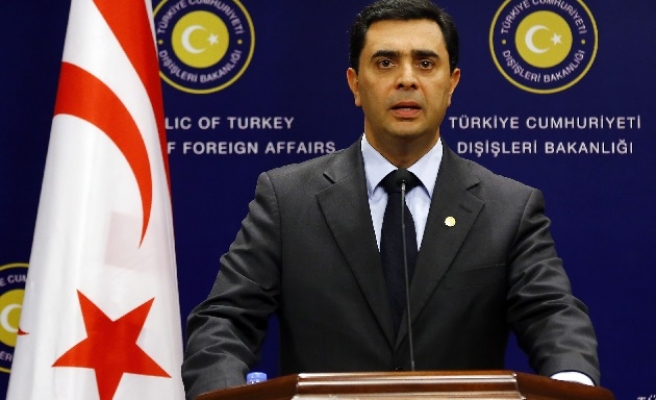 Turkish Republic of Northern Cyprus Foreign Minister Ozdil Nami called on the world to "indoctrinate" the Greek Cypriot administration to continue negotiations over the Cyprus issue.

In a joint press conference with Turkish Foreign Minister Mevlut Cavusoglu on Friday in Ankara, Nami said TRNC hopes 2015 will be the year for a solution over the long-standing problems over the island.

"We don't want Turkish Cypriots to pay for the deadlock over the negotiations anymore and want the international community to indoctrinate the Greek Cypriot administration to solve the issue," Nami said.

Nami also warned of a stalemate situation over the divided island, saying that if the international community is "unable to give the Greek Cypriot administration the necessary warnings, 2015 will also be a lost year."

Nami said that Turkish Cypriots want the "potable water project" from Turkey to be a "peace project."

"We have already extended our hand to Greek Cypriots about the project, which will finish soon," he said.

The investment cost of the barrages is approximately $37 million and the project will supply around 130 million cubic meters of water to the Turkish Republic of Northern Cyprus every year.

"We want the limitations over TRNC by the international community to be lifted and TRNC to be a member of various international organizations," Cavusoglu said. "We will not let TRNC be treated unjustly."

The dispute goes back to 1960, when the Treaty of Guarantee was signed between the Turkish and Greek Cypriots, along with the British government, over the island.

The treaty banned the island of Cyprus from participating in any political or economic union with any other state, as well as making other parties guarantee its independence, territorial integrity and security.

However, in 1963, only three years after the treaty was signed, the Turkish Cypriots were ousted by force from all organs of the new republic by their Greek-Cypriot partners, which violated the founding agreements and the constitution.

The Greek Cypriots, thereafter, claimed to represent the Republic of Cyprus, which was considered illegal and not recognized by Turkey.

Between 1964 and 1974, the international community made several peacemaking efforts that all ended in failure.

In 1974, an attempt by Greece to annex the island through a coup was made, which was resisted by a Turkish peace mission in accordance with the 1960 treaty.

Consequently, the Turkish Cypriots set up their own republic in 1983, while continuing the search for reconciliation.

The European Union recognizes the Greek-Cypriot administration in the island, but Turkey recognizes the Turkish Republic of Northern Cyprus diplomatically.

Negotiations between the Turkish and Greek Cypriots resumed after a two-year pause in February 2013. The previous round of talks had collapsed because of the eurozone debt crisis and the Greek Cypriot side's turn to occupy the EU presidency in 2012.

However, the Greek Cypriot administration suspended talks over the divided island on Oct. 7, 2014 after Turkey sent a ship to monitor an oil-and-gas exploration mission off the coast of Cyprus.