Another Turkish charity organization, Deniz Feneri, opened a hospital in Mogadishu after restoring the building. 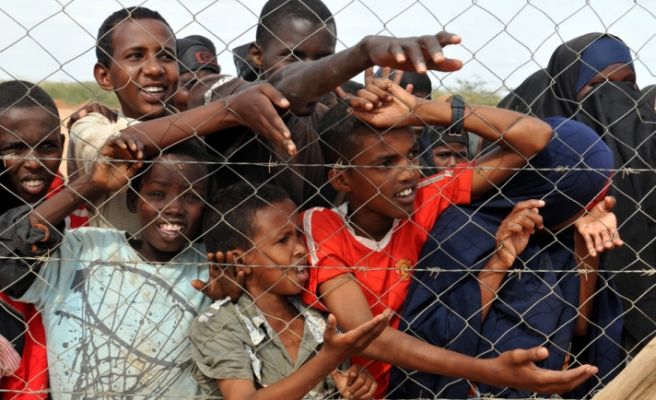 Officials from Turkish Religious Foundation distributed food packages to Somali people in a camp in the capital Mogadishu.

Turkish officials and soldiers helped women, children and the disabled people to carry their packages.

Mustafa Tutkun, director of the Religious Foundation for Foreign Affairs, told the A.A correspondent that they had distributed 1,600 packages to Somali people in the camp so far.

"Turkish people sent their charity under a campaign of our foundation 'A Zakat al-Fitr from Each House to Africa'. There are nearly 10 thousand people in camps in the region of Hodan. Turkey will send more humanitarian aid by a ship in the coming days," he added.

According to the Islamic tradition, Zakat al-Fitr is charity given to the poor at the end of the fasting in the Islamic holy month of Ramadan.

Meanwhile, another Turkish charity organization, Deniz Feneri, opened a hospital in Mogadishu after restoring the building.

The hospital will serve 600 patients a day with five doctors and five nurses in the coming days.

Salado Shuriye Ilmi, who brought his son to the hospital, told the A.A correspondent that his son was suffering from rachitis, measles and gastrointestinal problems because of malnutrition. She thanked Turkish people for giving a helping hand to Somali people.

Another woman, Siti Abdulmuhammad, told the A.A that she came from a village, some 200 km from the capital city. "There is no water, no food. Two of my children died a month ago. Now, I have four children and all of them are sick. I do not know what to do."

Mehmet Cengiz, director-general of the Deniz Feneri charity organization, told the A.A correspondent that the Doctors Worldwide would provide financial source for the hospital.

"We will equip the hospital with all necessary equipment. There will be a guesthouse for voluntary doctors. We will bring specialized doctors from Turkey," he added.

Unal Ozturk, chairman of Kimse Yok Mu charity, told A.A correspondent on Sunday that a refugee movement occurred after drought in Somalia, stating that nearly 1,000 Somali refugees were coming to camps a day.

Ozturk said that there were three important centers of refugee movement, one of which was in Somali capital of Mogadishu. "People are living in over 100 camps around Mogadishu. We exerted efforts for camps and an aid network has been formed."

"We are currently in Dadaab camp. We distributed to food to 3,600 families there. We will work on more assistance and permanent projects for the region," he said.

Ozturk said, "people there are in very difficult condition. They are suffering from drought and famine. They are sick. We also try to supply water to them. They need medical care. We sent our doctors to Mogadishu. The doctors started to serve there."

According to the United Nations, up to 12 million people in the Horn of Africa have been affected by famine and suffering from severe shortage of food and water. The U.S. Agency for International Development said that more than 29,000 Somali children under the age of 5 have died in the past 90 days while 640,000 Somali children were acutely malnourished.