A normalization of relations between Turkey and Armenia is impossible without a solution, Turkish foreign minister Ahmet Davutoglu said. 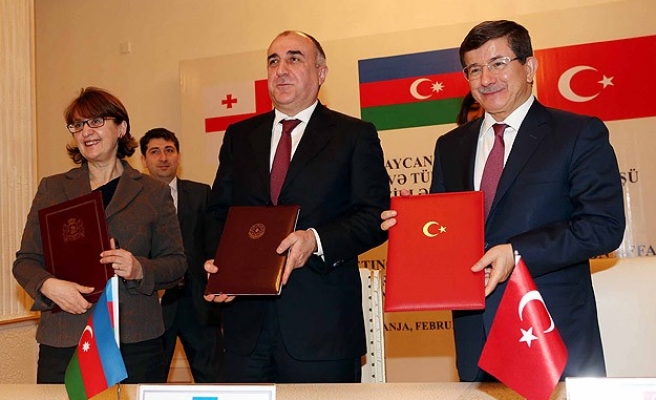 Relations between Turkey and Armenia will be impossible without agreeing on a solution to the Azerbaijan and Armenia conflict, Turkey's Foreign Minister Ahmet Davutoglu said.

Davutoglu addressed the issue during a joint press conference with his Azerbaijani and Georgian counterparts on Wednesday. He said that opening the border with Armenia would be possible if Yerevan withdraws its forces from the region.

Azerbaijani Foreign Minister Elmar Memmedyarov said they discussed the Southern Gas Corridor from the Caspian Sea to Turkey and the EU, energy issues and the Baku-Tbilisi-Kars regional rail link project, which will directly connect Turkey, Georgia and Azerbaijan.

He also said they exchanged views on further developing relations.

A joint declaration was signed by the three ministers after the annual Turkey-Azerbaijan-Georgia tripartite meeting.The first meeting took place in Turkey in 2012 and the second in Georgia.

Meanwhile, presidents of Turkey, Azerbaijan and Georgia are scheduled to hold a tripartite meeting in Georgia's capital, Tbilisi in June 2014.

Azerbaijan and Armenia fought a three year war over the mainly Armenian-populated region (of Nagorno-Karabakh) in 1991-1994, following the collapse of the Soviet Union. Baku's army was later defeated and the territory was occupied by Armenian and separatist forces.