The issue of PKK militants infiltrating from Iraq to Syria will become part of the discussion Davutoğlu will have with Massoud Barzani, the president of the Kurdistan Regional Government in northern Iraq, when he visits there on Wednesday. 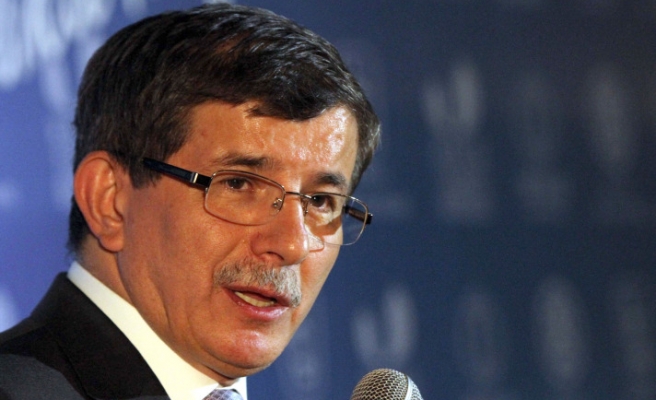 Turkish Foreign Minister Ahmet Davutoğlu has vowed not to let Syria become another Lebanon, saying that Turkey will never allow de facto structures in northern Syria lest the country fragment along sectarian lines. “If there are de facto formations that have emerged out of the chaotic situation in Syria, this would threaten the unity of Syria,” Davutoğlu says.

Speaking to a group of reporters on Sunday night, he said that Turkey will never allow such a possibility for its southern neighbor.

He was referring to the emergence of a structure in northern Syria where the militant Kurdistan Workers’ Party (PKK) and its affiliate the Democratic Union Party (PYD) have joined forces. “We will not let any terrorist groups prosper along our borders, whether they are al-Qaeda or the PKK. Both are seen as a threat [to the country] and all measures will be taken to stop them,” Davutoğlu said.

He explained that the PKK-PYD coalition seized on the opportunity given by the power vacuum in Kurdish towns and villages following the withdrawal of Bashar al-Assad’s forces from Kurdish-populated areas to fight the opposition forces in Damascus and Aleppo. “They [PKK-PYD] are opportunists. They cooperated with Assad in the past, and now they are trying to fill the power vacuum there. But this could lead to a confrontation with Syrian opposition groups. We do not want this to happen,” he said.

The Turkish foreign minister underlined that Turkey will take any measures it can to prevent terrorist groups from operating in northern Syria, noting, though, that Turkey is not against Kurdish people living in Syria. He stated that Turkey has close cooperation with the Kurdish National Council (KNC) of Syria, recalling that Ankara raised the infringement of rights for Kurdish people with Assad when both countries were cooperating closely in the past.

“If there is wrongdoing directed against Nusayris or Christians, we will take a position against that as well,” he added. Davutoğlu emphasized that different ethnic and religious groups have lived in Syria and in the Middle East for centuries. “We never consider any group of people as a threat.” He also said Turkey would not make any distinction between Kurds and Turkmens.

He revealed that Turkish intelligence knew how many PKK militants had moved from northern Iraq to Syria and where they are positioned. The issue of PKK militants infiltrating from Iraq to Syria will become part of the discussion Davutoğlu will have with Massoud Barzani, the president of the Kurdistan Regional Government (KRG) in northern Iraq, when he visits there on Wednesday.

Commenting on the Assad regime’s aggression in Aleppo, Davutoğlu said the city is a key economic and trade hub in Syria. “If security in and around Aleppo is not restored, this would pose a threat to Turkey,” he said, stating that Turkey has taken up all the necessary measures to respond to a security threat from the power vacuum in Aleppo.

The Turkish foreign minister predicted that Turkey may need to take more drastic measures if the onslaught in Aleppo triggers a huge refugee crisis for Turkey. “We may have to find a way to host these refugees within Syria,” he said, signaling that Turkey may be forced to set up a buffer zone on Syrian soil to address the mounting refugee crisis. Although he declined to give a specific number of refugees that would prompt Turkey to take such action, he asked simply, “What would happen if the refugee number reaches 100,000?” Turkey currently hosts some 45,000 Syrian refugees in various centers.

Davutoğlu also shared with reporters the latest number of senior army defectors. According to government data, 26 generals, 47 colonels and 130 other officers defected from the Syrian army and have taken refuge in Turkey. “In recent weeks, even some Nusayris have defected to Turkey,” he said.

The Turkish minister also denied a Reuters report on a secret base in Turkey, allegedly operated jointly with allies Saudi Arabia and Qatar to direct military and communications aid to Syrian rebels from a city near the border, citing Gulf sources. “There has been much speculation on this [arming the rebels]. Most of what the Syrian opposition has in their hands is from the stock the defectors brought with them when deserting the Syrian army. Other arms and munitions were obtained during attacks [on Syrian troops]. Speculative news like this should be discounted,” he said, adding that there is no longer any border security at Syrian borders.