Turkish FM in Myanmar to highlight plight of Muslims / PHOTO 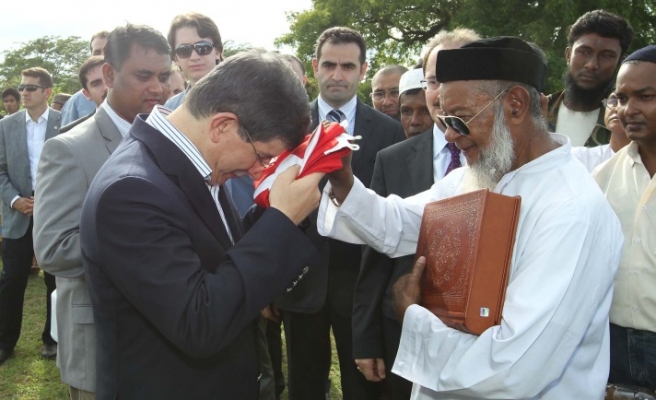 A Turkish delegation led by Foreign Minister Ahmet Davutoğlu, and which includes Prime Minister Recep Tayyip Erdoğan's spouse and daughter, arrived in Myanmar early on Thursday in a bid to both “boost bilateral relations” and “bring international attention to the plight of suffering Rohingya Muslims.”

Turkish Foreign Minister Ahmet Davutoğlu, accompanied by a Turkish delegation, paid a visit to Myanmar in a bid to both “boost bilateral relations” and “bring international attention to the plight of suffering Rohingya Muslims.”

On the same day, Davutoğlu also met with his counterpart in Myanmar, Wunna Maung Lwin in Myanmar's capital Naypyidaw. Davutoğlu said that Turkey and Myanmar were the two big states of Asia, adding that his visit had been the first high-level one from Turkey to Myanmar. Davutoğlu's meetings with both Sein and Lwin were closed to the press corps. Davutoğlu is also scheduled to meet with Myanmar opposition leader Aung San Suu Kyi.

Davutoğlu stated that they arrived in Myanmar to establish bilateral relations and reach Arakan, the location of the recently escalating violence against Rohingya Muslims by extremist Buddhists. “We would like to carry on with both of our aims,” said Davutoğlu.

He said that the Myanmar government's decision to grant their visit reflects Turkey's influence in the international field. “Myanmar did not do the same for any other countries. Our ambassador worked hard,” said Davutoğlu.

Davutoğlu stated that the government in Myanmar was only allowing United Nations (UN) and their members of staff to get into the Arakan region.

Sein declared a state of emergency in Arakan province following clashes between Buddhists and Muslims and deployed troops to restore stability.

Replying to questions of journalists on his flight to Myanmar, Davutoğlu stated that this was the first high-level visit between Turkey and Myanmar. He added that they could see Myanmar's government opening up to the world step by step.

Davutoğlu also restated that he had given two instructions to the ambassador who was appointed to Myanmar, adding first one was to find the graveyards of the 1,500 Turkish soldiers who were taken to Myanmar from Çanakkale and Egypt during WWI and were killed there. “I am following very closely the graveyard issue. We are greatly indebted to those soldiers,” said Davutoğlu, adding he has written a letter to Lwin regarding the martyrs' cemeteries.

The Turkish foreign minister underlined that Turkey is a member of the Association of Southeast Asian Nations (ASEAN), adding that Turkey's aid to Arakan will increase its visibility in ASEAN and around the globe.

Meanwhile, the Turkish Prime Ministry's Disaster and Emergency Management Directorate (AFAD) has stated that so far they have collected TL 2.1 million in their aid campaign for Muslims in Myanmar, who are facing violence and discrimination. AFAD thanked the Turkish citizens who have supported the Muslims suffering from civil war, ethnical massacre and poverty in the Arakan region of Myanmar.