The Turkish foreign minister held a series of talks with his counterparts from several countries in New York. 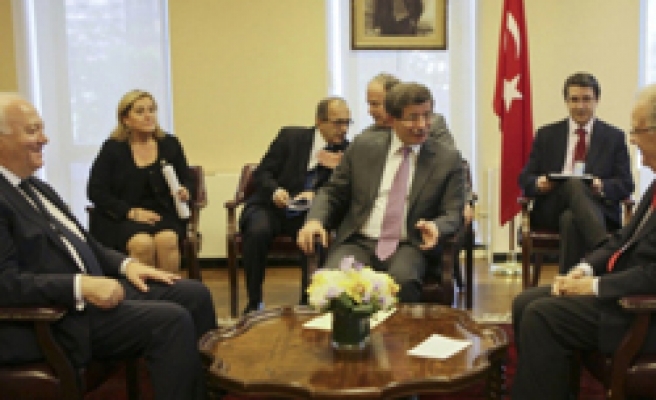 The Turkish foreign minister held a series of talks with his counterparts from several countries in New York, USA on Monday.

Turkish Foreign Minister Ahmet Davutoglu, who arrived in the United States last week to attend the UN General Assembly meetings, met with foreign ministers of Iraq, Brazil, Madagascar, Singapore, Yemen, Georgia and Gambia on the last day of his talks in New York.

Brazilian Foreign Minister Celso Luiz Amorim also expressed his appreciation over the September 12 referendum during his talks with Davutoglu, as bilateral relations and opening of a Turkish embassy in Madagascar were on the agenda of the Turkish minister's meeting with his Madagascan counterpart, sources noted.

According to diplomatic officials, Singapore's Foreign Minister George Yeo invited Davutoglu to his country during their gathering, as Yemen's domestic problems were discussed at Davutoglu's meeting with Yemeni Minister Abu Bakr Abdallah al-Qirbi, moreover, the Middle East peace process and the humanitarian aid convoy heading for Gaza were the matters Davutoglu discussed with his Egyptian counterpart Ahmed Ali Aboul Gheit.

Bilateral relations between Turkey and Georgia, as well as regional cooperation opportunities were on the agenda of Davutoglu's meeting with Georgian Foreign Minister Grigol Vashadze, as Gambia's foreign minister informed Davutoglu on his president's desire to visit Turkey in near future, sources added.

Upon completing his talks in New York, Davutoglu proceeded to Boston.

In Boston, Davutoglu is expected to deliver a speech at Harvard University and hold a series of talks.

Davutoglu who chaired a meeting on counter-terrorism at the UN Security Council, later held bilateral meetings with counterparts.

He is scheduled to depart from the United States for Turkey on Thursday.