Neo-Ottoman label result of uneasiness with Turkey's power, Turkey's FM Davutoğlu said, and the label is being used as a tool to spread fear about Turkey 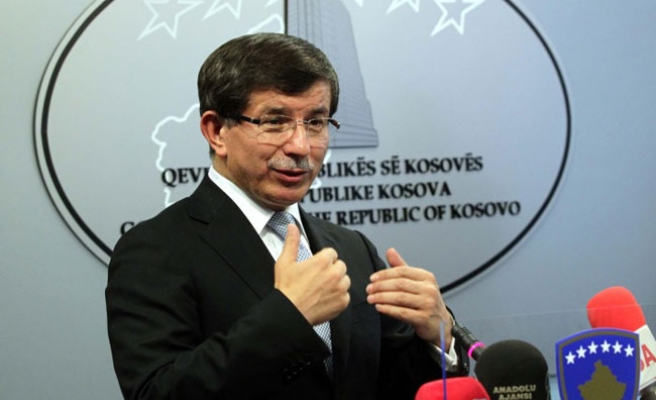 Foreign Minister Ahmet Davutoğlu has expressed his belief that the emerging label of "neo-Ottoman" for Turkish efforts in the Balkans stems from the uneasiness some have felt in the face of Turkey's power in the region, and the label is being used as a tool to spread fear about Turkey's motives in the country.

Speaking to Today's Zaman from the capital of Kosovo, Pristina, Davutoğlu indicated on Sunday that Turkey's increasing role in the region as an intermediary and a policy maker have triggered reactions from some, encouraging them to dub Turkish efforts as neo-Ottoman moves. The foreign minister said he "found it to be natural," given Turkey's increased visibility in the Balkans.

"I see mixed reactions, both good and ill-natured," Davutoğlu said, as he clarified that he vehemently opposed claims of a neo-Ottoman mindset at every opportunity.

"Some use the term specifically to invoke fear and feelings of 'getting even' to minimize our increasing influence in the Balkans," Davutoğlu suggested, elaborating that the real source of uneasiness lay in Turkey's role in the development of the region, including between Serbia, Bosnia and Turkey to overcome many cases in the past "which people thought would never be opened again."

Also remarking about the frequency of his visits to the region in the last two years, Davutoğlu offered that "no such [frequency of] activity was seen before," and that the fast-paced dialogue created an excuse for remarks of neo-Ottoman motives but the people on the street were welcoming of Turkey's role in their region.

In response to questions from reporters about whether Turkey would have a role in the dialogue process between Kosovo and Serbia, Davutoğlu stated that Turkey would be "glad to extend support" to these countries if such support would "contribute to the process between Belgrade and Prizren, as it did with Serbia and Bosnia."

Touching on the international reaction to Turkey's involvement in restoration efforts in the Balkans, Davutoğlu explained that the EU and the US were "in the mood of leading the framework [and] then trying to pull Turkey to their side" up until October 2009, when the country initiated the trilateral mechanism between Serbia and Bosnia and kicked-off initiatives in the region on its own, which have rendered the countries "more transparent toward Turkey [with regards to their plans] and more interested in consultation with the country."

Davutoğlu further noted that relations between Turkey and Serbia were also based on friendly dialogue and that the Serbians had asked for a greater contribution since witnessing "how impartial Turkey remained in the process between Bosnia and Serbia."

During his stay in Kosovo, Davutoğlu visited Ottoman-era shrines and neighborhoods accommodating citizens of Turkish origin in the country. The foreign ministry also visited the Turkish battalion assigned for duty in the NATO-led Kosovo Force (KFOR) and a Turkish political party, the Democratic Turkish Party, before he left for Bosnia as part of his tour of the Balkans.