Turkish FM stated that PKK and Democratic Union Party (PYD) take an advantage from the chaos in the country by standing next to the regime. 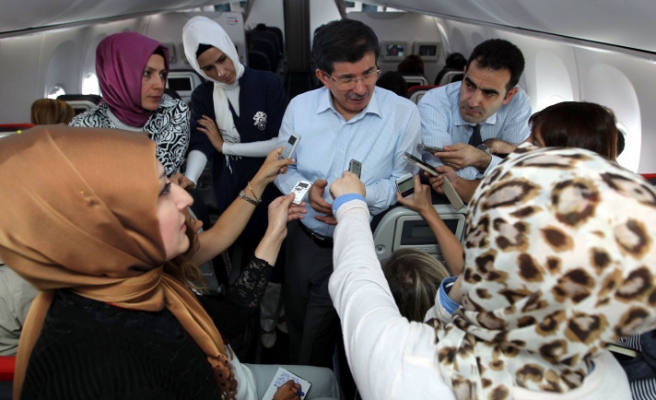 Turkish Foreign Minister Ahmet Davutoglu drew attentions to the deep rooted relations between Turkey and Iran and stated that Turkey always paid high attention to its relationship with Iran.

Davutoglu replied the questions of journalists on his way to Myanmar for his formal visit.

Davutoglu stressed his point of view over the relations between Turkey and Iran and stated that bilateral relations move forward with the care of both sides and said, "It is our right to hear suitable replies and see respect to Turkey from Iranian officials when we hold extensive bilateral relationship with them."

Regarding a group of 48 Iranian nationals who have been kidnapped in Syria, Davutoglu pointed that they always separate the political and humanitarian matters and said that they are ready to help in any areas if they can.

When reminded about the PKK acts in the cities of northern Syria and asked if these acts have effects on the Syrian government or not, Davutoglu replied that Turkey would like to see a peaceful Syria which reflects its people's will.

He stated that they make effort for a peaceful Syria and stated that however there is a chaos in the country because of the Syrian government's attitude.

He also stated that PKK and Democratic Union Party (PYD) take an advantage from the chaos in the country by standing next to the regime.

More, Davutoglu mentioned that Turkey is still monitoring every incident in Syria and said that from Latakia to El Haseke it is not just a Kurdish region and there are zones of Kurdish, Arab, Nusayri and Turkmen.

Davutoglu answered a question about the PKK threat in the region and when asked if it is fictional or not, he said, "The only reality is that PKK militants are there. Al-Assad supports cities of Afrina and Kobani by providing arms.

This is not fictional, it is a real threat against us. We take it as a threat and we take our precautions. The only fictional thing is that map. From Qamishli to Latakia, the whole northern Syria region is not just Kurdish."

First there has to be elections, which include Kurdish, Arabs and Turkmens and after reaching a consensus, you can decide where to give 'autonomy' all together."