Turkish Foreign Minister Ahmet Davutoglu met with the leader of the regional administration in north of Iraq, Massoud Barzani in Irbil. 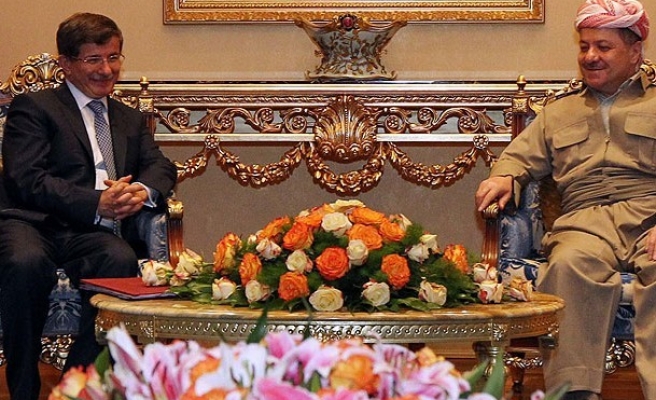 Turkish Foreign Minister Ahmet Davutoglu on Wednesday met with the leader of the regional administration in north of Iraq, Massoud Barzani in Irbil.

Davutoglu's visit came amid Turkish concerns over emerging Kurdish rule in Syria's northern cities along the Turkish border following the withdrawal of Bashar al-Assad's forces from these predominantly Kurdish-populated areas to fight opposition forces in Damascus and Aleppo.

Davutoglu told reporters after a meeting of 3.5 hours with Barzani that "Turkey's expectations were very clear"

Speaking to reporters after meeting with Barzani,Davutoglu said that "Turkey's expectations were very clear".We shared with Barzani our thoughts on the region, our vision and our concerns, Davutoglu stated.

The regional administration in north of Iraq received our message, Davutoglu stressed.

Minister Davutoglu will continue talks in Irbil on Thursday.

The visit was moved up because of security concerns perceived by Turkey due to the military presence of the PKK-affiliated Kurdish Democratic Union (PYD) in northern Syria.

Turkey and Iraqi Kurds have built close ties over the past few years, after Barzani committed to supporting Turkey's efforts against the PKK, either in combating PKK bases in northern Iraq or tackling PKK-affiliated groups in northern Syria.