Turkish FM Davutoglu said that Turkey did not have a long-lasting crisis with the U.S. in the past and recently. 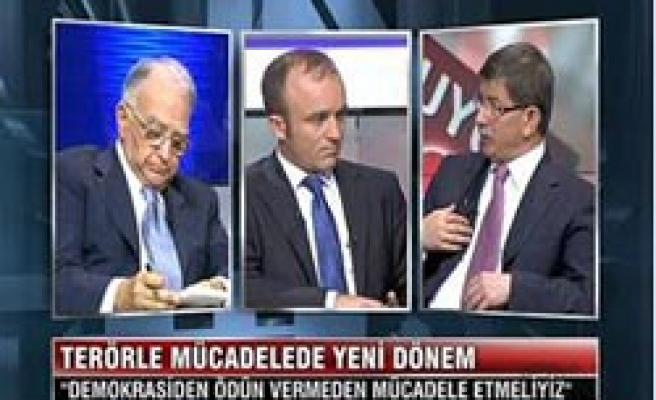 Turkish Foreign Minister Ahmet Davutoglu said that Turkey did not have a long-lasting crisis with the United States in the past and recently.

In a televised interview with a private broadcast, Davutoglu said that strategic priorities and methods of Turkey and the USA were quite the same.

Referring to the issue of Iran, Davutoglu said, "the Tehran Agreement is still valid. The process has already begun and technical negotiations have been under way."

"We agreed in principle that a meeting could take place in September. But the date can change. Both parties want Turkey to be involved in the process," he said.

Davutoglu described the country's fight against PKK as the most vital issue on their agenda.

"We want to maintain our fight against terror without narrowing democracy and making any restrictions about human rights," he said.

Upon a question about Israeli raid on six-ship flotilla carrying aid to Gaza, Davutoglu said, "as the government, we made all necessary warnings. But we do not have the right to prevent a non-governmental organization. Israel, today, experiences the biggest isolation in its history since it contradicted with the conscience of the humanity."