Turkish FM: There is no reason for Somalia not to recover

Speaking to reporters together with Somali Deputy Prime Minister Said Korshel, Davutoglu said that the interest of Turkey in Somalia should be a flare to the world. 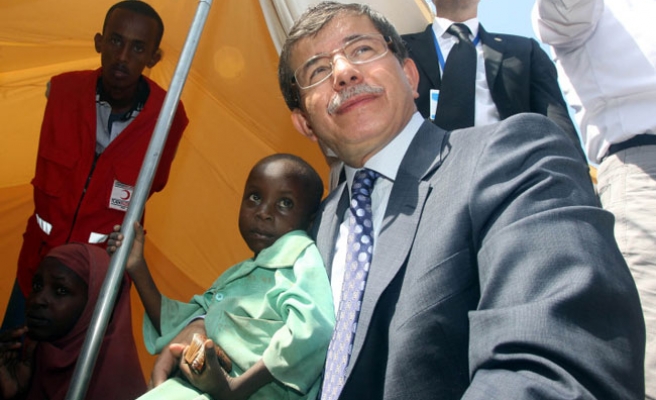 Turkish Foreign Minister Ahmet Davutoglu has said that there was no reason for Somalia not to recover.

Davutoglu, who arrived in Somalia together with Turkish Prime Minister Recep Tayyip Erdogan, visited Somali people in the tents set up by Turkish Red Crescent in capital Mogadishu on Friday.

Speaking to reporters together with Somali Deputy Prime Minister Said Korshel, Davutoglu said that the interest of Turkey in Somalia should be a flare to the world, adding that people should come to Somalia and fulfill their responsibilities which would help the country recover.

Noting that Somalia had advantages in the aspect of tourism facilities, Davutoglu said that there was also an important amount of animal stock in the country.

Korshel said that Turkey, with the steps it had taken and with the visit, changed the perception that nobody would be able to go to Somalia. He thanked Turkish government, people and Erdogan.

Tens of thousands of people are suffering from drought and famine in Somalia and head for refugee camps in Kenya and Ethiopia in search of food and water. Turkey, on Wednesday, hosted an extraordinary meeting of the Organization of the Islamic Cooperation (OIC) in Istanbul to discuss the recent situation in Somalia, the reasons of hunger crisis and what can be done for Somali people.